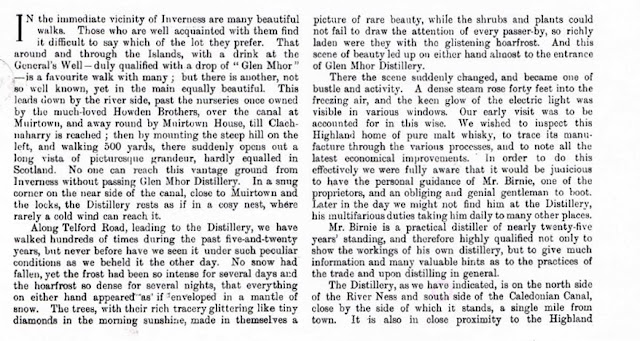 Delighted to be able to bring you the previously missing 1898 Trade Supplement that introduced Glen Mhor, a new distillery, to a wider audience. My thanks to Alan, for providing this wonderful account.

Here's the text from page 1 for your reading pleasure, including some additional notes:

'In the immediate vicinity of Inverness are many beautiful walks. Those who are well acquainted with them find it difficult to say which of the lot they prefer. That around and through the Islands, with a drink at the General's Well¹ - duly qualified with a drop of 'Glen Mhor' - is a favourite walk with many; but there is another, not so well known, yet in the main equally beautiful. This leads down the river side, past the nurseries once owned by the much-loved Howden Brothers², over the canal at Muirtown, and away round by Muirtown House, till Clachnaharry is reached; then by mounting the steep hill on the left, and walking 500 yards, there suddenly opens out a long vista of picturesque grandeur, hardly equalled in Scotland. No one can reach this vantage ground from Inverness without passing Glen Mhor Distillery. In a snug corner on the near side of the canal, close to Muirtown and the locks, the Distillery rests as if in a cosy nest, where rarely a cold wind can reach it.

Along Telford Road, leading to the Distillery, we have walked hundreds of times during the past five-and-twenty years, but never before have we seen it under such peculiar conditions as we beheld it the other day. No snow had fallen, yet the frost had been so intense for several days and the hoarfrost³ so dense for several nights, that everything on either hand appeared as if enveloped in a mantle of snow. The trees, with their rich tracery glittering like tiny diamonds in the morning sunshine, made in themselves a picture of rare beauty, while the shrubs and plants could not fail to draw attention of every passer-by, so richly laden were they with the glistening hoarfrost. And this scene of beauty led up on either hand almost to the entrance of Glen Mhor Distillery.

There the scene suddenly changed, and became one of bustle and activity. A dense steam rose forty feet into the freezing air, and the keen glow of the electric light⁴ was visible in various windows. Our early visit was to be accounted for in this wise. We wished to inspect this Highland home of pure malt whisky, to trace its manufacture through the various processes, and to note all the latest economical improvements. In order to do this effectively we were fully aware that it would have to be judicious to have the personal guidance of Mr Birnie, one of the proprietors, and an obliging and genial gentleman to boot. Later in the day we might not find him at the Distillery, his multfarious duties taking him daily to other places.

Mr Birnie is a practical distiller of nearly twenty-five years' standing, and therefore highly qualified not only to show the workings of his own distillery, but to give much information and many valuable hints as to the practices of the trade and upon distilling in general.

The Distillery, as we have indicated, is on the north side of the River Ness and south side of the Caledonian Canal, close by the side of which it stands, a single mile from the town. It is also close proximity to the...'

¹ General's Well is named after General MacIntyre who lived Bught House nearby, he used to drink from the well every day, believing it had health properties.

² Howden's is still in business today, founded in 1801, the nurseries at Muirtown provided seeds and plants for generations. At one time a shop was on Telford Street but now it is located in Stoneyfield.

³ a greyish-white crystalline deposit of frozen water vapour formed in clear still weather on vegetation, fences, etc.
⁴ you can read all about the fanfare of having electricity in our Newspaper section, where there are several articles. The most detailed is from the Northern Chronicle and General Advertiser for the North of Scotland - Wednesday 21 October 1896.
Labels: Glen Mhor Mackinlay & Birnie Supplement to The Distillers and Brewers magazine