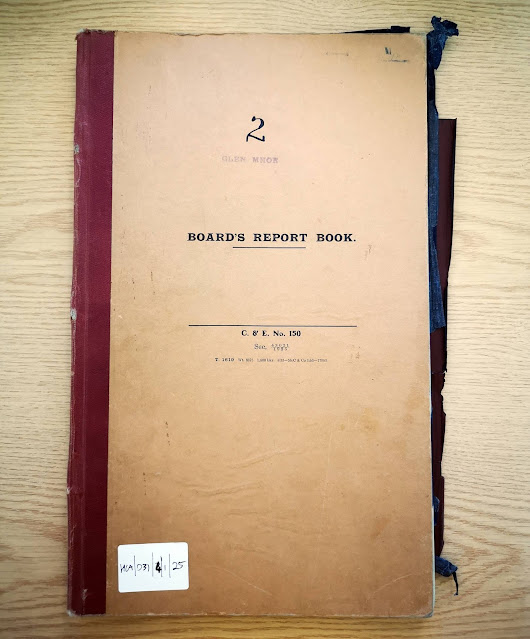 One of the most fascinating and detailed finds when researching Glen Mhor, is the above log book. This records any requests that required approval from the onsite Customs & Excise representative of the government.

This particular book covers 1936 until the 1960s when the excise operation in Inverness was replaced - gone were specific stationed Customs & Excisemen and instead the city had its own office.

The log is held at the Highland Archives Centre in Inverness (HCA/D31/4/1/25) and I'm thankful for access to it. As its pages have been relatively undisturbed for decades, this research project will go through each entry and debate its contents. This will shed new light on life at the distillery and give us insight into its workings. Our timeline will be updated with any entries of note.

Also worth highlighting is the log features the work of Neil M. Gunn, who was stationed at Glen Mhor until his retirement in 1937 to become a full-time writer. In doing so, one of Scotland's greatest writers was born.

As each of the pages will receive their due focus and consideration, this page lists every article in chronological order. Posts themselves are a specific hashtag here. These logs were a necessary administrative feature of any distillery of the period, hopefully we can find the precursors to 1936, as earlier records would have been complied in a similar form.

My thanks also go out to Alan Winchester for his insightful thoughts on these entries from a distilling perspective.

A request for works during the silent season at Glen Mhor.

The worms are tested for a leak.

A request to replace piping between the Feints Charger and No.2 Low Wines Still.

A problem with the wash still anti-collapse value prompts a risky decision.

A decline in volume leads to the discovery of a leaky still.

Routine requests during the silent season, shed new light on the inner workings.

A request to repair the spent Lees Receiver number 2, reveals a siphon device meant to increase the lifestyle of the stills.

A request for the spirit stores to be left open at both Glen Albyn and Glen Mhor, reveals a previously unknown upgrade.

A leak is identified, and work takes place to correct the issue.

A remarkable entry, which confirms the original Low Wines Still was mothballed when Glen Mhor's 3rd still was installed. The new manager wishes to ascertain its state for future use?

Nothing much to see as silent season marks the arrives of the routine maintenance request.

The newer of the 3 stills requires some urgent attention.