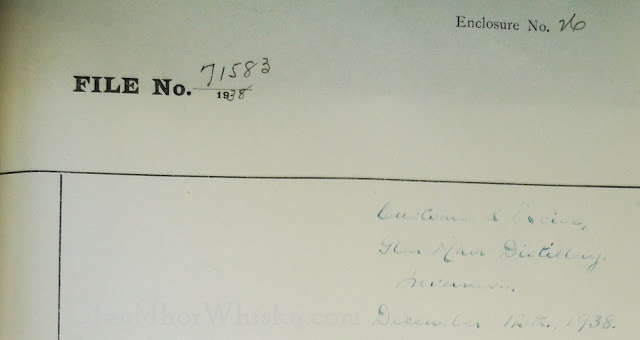 We've reached the end of 1938 and quite an eventful year for our log book deep dive. This entry from the 12th December gives us another great slice of Glen Mhor history. Plus, a mention, and therefore confirmed existence, of something that's been on our mystery hitlist for some time now. Excited? We are, so read on.

It must be noted that we've had some terrible handwriting in the log, but this page in particular brings us spectre of faint writing. This was a hard one to crack and my thanks to Alan Winchester for helping piece it together, the outcome makes all the effort worthwhile.

So, far in the log we've seen the entries fall into two distinct themes, firstly requests for silent season repairs and secondly, the more enticing prospect of problems. From leaks to spillages, distilling at Glen Mhor was never boring and this latest entry takes us into the fermentation area. 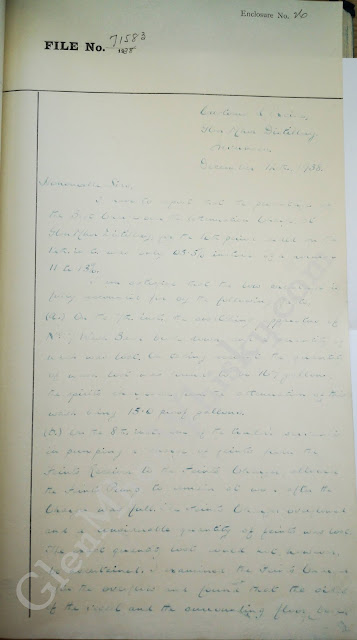 I was satisfied that the low percentage is fully accountable by the following factors,

(a) On the 7th inst. the switching apparatus of No.7 Wash broke down a quantity of wash was lost. On taking account the quantity of wash lost was found to be 167 gallons, the spirits chargeable from the attenuation of this wash being 15.0 proof gallons.

(b) On the 8th inst. one of the trader's servicemen in pumping a charge of feints from the Feints Receiver to Feints Charger allowed the Feints Pump to ??? at ??? after the Charger was full. The Feints Charger overflowed and a considerable quantity of feints was lost. The exact quantity lost could not, however, be ascertained. I examined the Feints Charger after the overflow and found that the sides of the vessel and the surrounding floor being evidence of a considerable overflow. The ground beneath the vessel was saturated, on view of these facts I am satisfied that the feints which overflowed was genuinely lost.

I am, Honourable Sirs,

B.O. 71583. 19.12.38 no action is considered necessary except to quote the number of these papers in the official books and documents affected.' 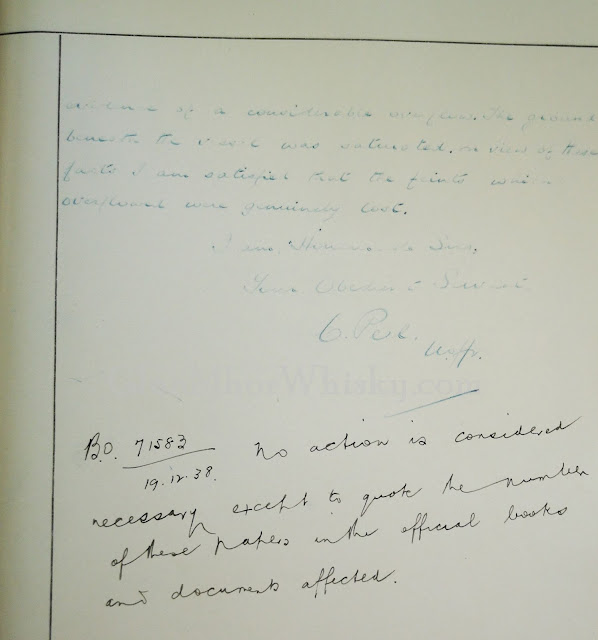 The switchers at Glen Mhor were powered by the water turbine until 1960, when the turbine was retired. The device had been in use since 1894, so it had put in quite the shift. What we don't know at this point in time is if this incident is representative of problems that we'll see in the forthcoming pages, prompting a move to more reliable electrical source at a later date?

We do have an image of the washback area, this is either Glen Albyn or Glen Mhor with my belief it is the latter. This comes from the resources of Rodney Burtt, who as a former employee of both distilleries, collated material about their legacy. We know the room itself was described in 1894 as:

'over 40 feet in length with a concreted floor, and contained four large fermenting vessels, each with a capacity of 6500 gallons. Space has here been reserved, for an extension to hold other four tuns.'

Two further washbacks were added, but the 7th vessel remains a mystery to us, including when it was installed (it was noted to be present in 1975) and where it was located. So, this entry confirms it was being used in the distillery as early as 1938. Brilliant.

To try and confirm the location of the photograph below, we know washbacks 5&6 were planned as part of the 1898 extension. Lining up that plan with the image below, does not reveal any major concerns, the window in the background is exactly where the window should be in the plans, and it is a double rather than a single window width. Even the spacing and placement of the washbacks, looks correct. I know this is a real whisky geek type piece of theoretical detective work, but it does stack up as being Glen Mhor. 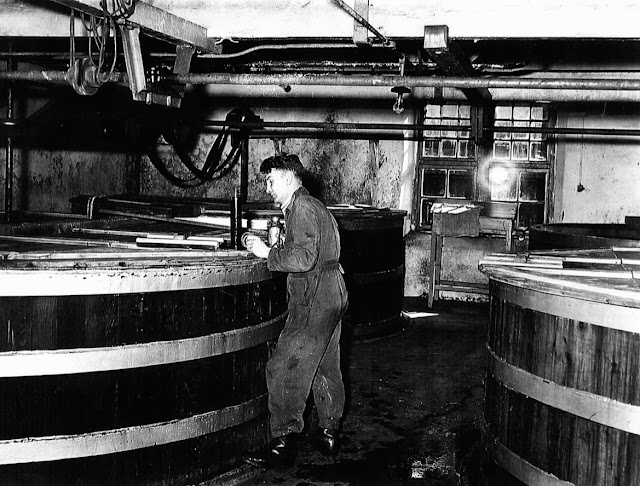 This entry was of particular interest to Alan, who provided a whole new level of insight:

'Firstly, the No 7 washback switcher broke down, in 1938 the washbacks would have been locked, and with whatever breaking, i.e. a broken belt or the blade breaking, the fermenting wash foam would be pouring through the roof of the washback or the space between the staves at the top of the washback, so foam would have been pouring out, they may have had to call the Officer out to open the lid so they could switch the head down manually or add soap, to depress the head, this is a sign that wort was relatively, and speaks to Gunn's book on whisky, when he and the Brewer discuss a washback rocking at a point during fermentation, there would be quite a mess!!!
This next loss is interesting, and I cannot make out what follows the Trader looks like serviceman or is it servant, I thought he would have said stillman¹, he correctly declares this as a considerable loss, and I wondered if the person was disciplined, which would not be a concern of the Officer, normally.
There's another point of interest in this, as the officer only speaks of feints and no mention of low wines, as I would have suspected that the Charger should have been described as a Low wines and feints charge, if not, it is quite uncommon to have a separate low wines and feints charger, anyway it's a loss of feints. This makes me think they were not operating a balanced distillation, and this may have occurred when the second low wines and feints still was added, a balanced distillation would eliminated this, this means they are running the low wines stills separate of the wash still, this leads to an unbalance of the quantity of feints, not uncommon, but it's interesting that a Doig designed Distillery, where the Wash still is sized and the low wines and feints still is two thirds of the wash still. I have always wondered when unbalanced distillation crept in.'
Unbalanced distillation? I'm just amazed at what debates these log entries offer and the insight into the distillery practices. The point about things being locked and the Exciseman needed to be summoned, often by the distillery manager, is a point proven in a later entry. You could imagine the scramble if a washback started overflowing violently and the Excise representative wasn't nearby, which explains why they were stationed at each distillery during this era.
As for unbalanced distillation, we'll see if we can shed further light on this practice in further entries.
¹ We have seen this specific Exciseman refer to the Stillman specifically in his other entries, so this would lead me to presume it is more likely a worker.