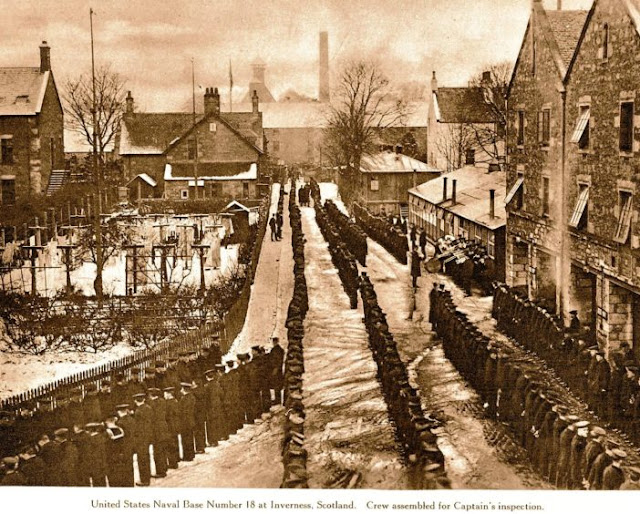 Both Glen Albyn and Glen Mhor were occupied by the US Navy during World War 1, to produce mines for the war effort. The distilleries became known as Base 18 and had quite an impact on the city. As recently as 2019, this was the subject of an exhibition in Inverness as this Press & Journal article outlines and the BBC Radio Scotland had a short segment entitled Inverness, Scotland: US Naval Base 18.

As you can see from the amazing photograph¹ above, taken at Glen Albyn and looking back towards Glen Mhor? in the distance, it was a huge undertaking. My thanks to the Inverness Local History Forum for more information on this and an excellent post, which lists Edwin A. Pratt's British Railways and the Great War Organisation, Efforts, Difficulties, and Achievements, 1921, now public domain, as a major source. There are some excellent photographs on their website, dedicated to the base and they've published a book, Northern Barrage, which I'll be purchasing shortly. In addition, there are American publications on this war effort such as The Northern Barrage (Taking up the mines), that hopefully will provide a wealth of information.

This article highlights the good work the sailors did locally with school kids.

This US Navy report, on page 61, outlines the selection process for the bases:

'Accordingly, a board was appointed by the Admiralty on October 6, 1917, which has generally been referred to as the Lockhart-Leith Committee, to investigate and report on the various suitable localities for mine depots for this project. The report of the committee, dated October 26, discussed in detail the possible locations for such bases, reviewed the transportation facilities, and gave as their decision that the most suitable locations were the Dalmore Distillery, at Dalmore, Alness, and the Glen Albyn Distillery, at Inverness. The report went into considerable detail, outlining exactly what buildings would be required as well as the new construction and machinery, and estimated the personnel requirements. This report and its recommendations were approved by the Admiralty, and the distilleries at Dalmore and Glen Albyn were at once commandeered for use as mine bases.'

A plan of the area exists, showing us both distilleries as they were in 1918 is available in various formats via the US Naval History and Heritage Command: 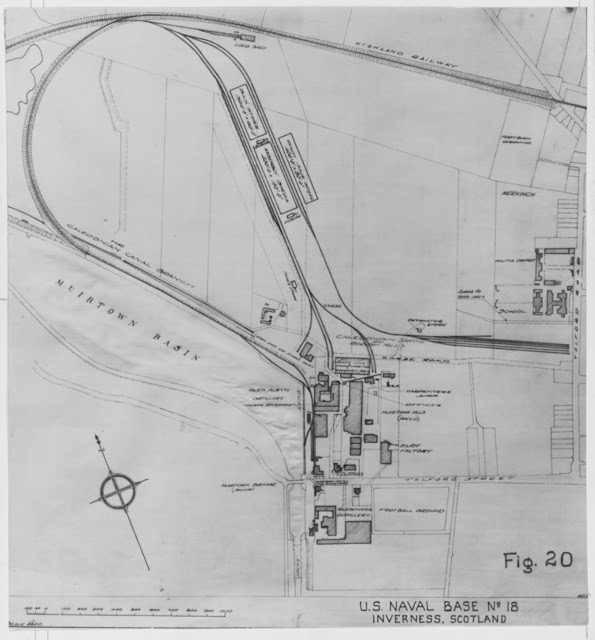 And here's the distillery area in greater detail: 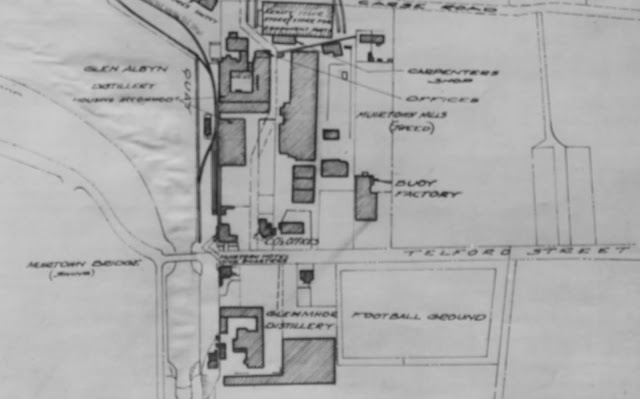 Other records do exist with the US Navy, including this record described as:

'This series consists primarily of correspondence, memorandums, and reports maintained by naval bases at Inverness and Alness (respectively known as Base #18 and Base #17), which were responsible for setting up and later dismantling the North Sea mine barrage.

The records cover all topics relating to the bases' activities ranging from logistics to personnel (transfers, discipline, and entertainment) to actual mine manufacturing and mine excursions. The series also documents relations with the local civil population in the Scottish Highlands from the time of establishment of the bases through mine laying and mine clearing operations through demobilization'.

The base wasn't without its troubles as this US Navy report outlines:

'While these preparations were in progress a disturbance occurred in Inverness between the United States bluejackets and the local population. It was the only occurrence of its kind which marred a sojourn of approximately two years of the United States forces in Scotland. The riot had been brewing for a long time and revolved essentially around the old, old question of the feminine contingent. Our men with their higher pay and possibly greater attractions had captivated the Scotch lassies to such an extent that the native sons, upon demobilization, found their contemplated brides enamored with the foreigners.

The feeling grew steadily worse, even though every means to prevent an open brawl was used. Athletics were encouraged to the fullest possible extent with the hope of attracting the majority of the men to diversions in which the girl question would not arise. But, regardless of the precautions which were taken, the crisis was reached on the evening of April 25, when the demobilized soldiers and sailors, coupled with a portion of the male population, rose en masse and drove the American bluejackets off the streets. Liberty was stopped at once and remained suspended during the remainder of the period that Base 18 was kept in operation.

The whole affair was probably regretted far more by the citizens of Inverness than by our own men. The shopkeepers especially deplored the sad occurrence, since a very high percentage of their profits (and a very good profit it was) resulted from the trade with the American sailors. Later it was humorously interesting on Sunday afternoons to see the line of “bonny lassies” holding hands through the barbed-wire fence which separated them from their American “laddies” within the confines at Base 18.'

The following outline is provided by the Highland Historic Records:

'In 1917 it was decided that the United States and Britain would jointly create a barrier of mines between Scotland and Norway to restrict the movement into the Atlantic of German submarines.

The United States Navy established two naval bases, at Inverness (Naval Base 18) and Invergordon (Naval Base 17, see NH66NE 23), where mines, shipped in pieces from the United States to the west coast of Scotland, were assembled, by US naval personnel, prior to being loaded onto American mine-laying ships. Two bases had to be established because Inverness Harbour was not large enough to accommodate enough mine-laying ships at once.The mines were landed from the United States at Kyle of Lochalsh (from where up to 2,000 mines a week were moved by train to Invergordon) and Corpach (from where up to 1,500 mines a week were shipped through the Caledonian Canal to Inverness).
Using production line methods copied from the car industry, a total of up 1,340 mines a day was assembled at the two bases. The bases came into being in February 1918, the first mines arrived at Corpach on 5 April, and the first mines were assembled on 29 May. By the Armistice on 11 November the mine barrage was complete from Norway to within 10 miles of Orkney. 56,760 US mines had been laid in just over 5 months, and 16,300 British ones.
The Naval Base at Inverness was established in the premises of Glen Albyn distillery, strategically placed at the end of the Caledonian Canal and adjacent to Inverness Harbour. Existing buildings, including the manager's house, were used for accommodation and the base HQ, and large structures were built for the assembly and storage of mines. New railway tracks were laid to allow the rapid movement of material across the site.The site seems to have been cleared fairly quickly after the war².'

Needless to say, both distilleries were inactive during this war effort and I wonder where the casks were moved to, away from sailors with a thirst after a hard day's work?'

Searching through the newspapers, most articles date from 1919 onwards, which presumably is when censorship was lifted. There was a great deal of interest in America about how their boys were doing in Scotland...

This particular outline from Lawrence Morgan, talks about the dangers of their work, briefly mentions Scotland's largest distillery, laments its dry status and the fact that it rains every day!

Here we have an independent view of the base and the war efforts of the military. It confirms around a thousand men were stationed at the Inverness distillery base, their role and how important it was to the war effort.

And bizarrely of all, the concept of American personal having a base in Scotland, was the premise for a play to occupy the med, which eventually was staged in London and a meeting with royalty...

² This is backed up by our research showing when Glen Mhor was restarted and the legal action against the Admiralty for loss of earnings during this changeover period.