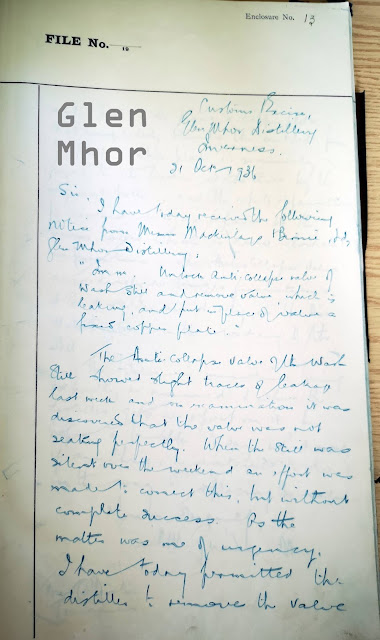 I’m delighted to be able to bring you another entry in the Glen Mhor Distillery Log Book that forms our ongoing exploration of this uncharted resource.
We’re still in 1936 and under the stewardship of Neil M. Gunn and his meticulous notes. This entry is a fascinating account of an urgent request regarding the wash still, which I’ll explain after the entry itself…

'?? unlock anti-collapse value of wash still and remove valve, which is leaking, and put in place of valve a fixed copper plate'

The anti-collapse valve in wash still showed slight traces of leakage last week and on examination it was discovered that the valve was not sealing perfectly. When the Still was silent over the weekend an effort was made to correct this, but without complete success. As the matter was one of urgency.

I have today permitted the distillers to remove the valve and put in its place a copper plate that completely binds? the outlet from the Still. This plate is securely fixed to the body of the Still by the original bolts, and the whole apparatus is covered over as before by the brass cover which is duly locked in position. The Anti-collapse valve accordingly no longer functions. And the distiller must rely on the Air Valve alone in the working of the Still.

The Valve is meantime being specially examined and when the distiller gets his report on it he hopes to be able to say what more, if anything, he intends to do in the way of replacing the valve.

The worry here would be that the still itself would collapse, which isn't something you see too much of nowadays. Perhaps elsewhere outside of the UK it might be a more casual visitor, but in my visits I can only ever recall seeing one collapsed still and that was at Balblair distillery. That might have been damaged as the result of something else. It certainly made for an odd sight and underlined the dangers of distilling that still very much exist, but held at arms length thanks to the safety rules and skill of employees.

Alan Winchester kindly offered his thoughts on this entry, for which I've thankful:

'They were taking a big risk, by isolating this valve, as an anti collapse valve, is a safety device, if it was leaking outwards this could result in flammable, vapour, in the stillhouse atmosphere, if they are relying on the still operators to remember to open the air valve!  A modern still has an over pressure or under pressure device and these are normally vented outside.  A collapsed still would result in a considerable loss of production.'

Why take the risk is another point to consider? Orders to fill, high demand and a tough schedule. If one part of the distillery takes a hit in output, then the rest of the chain becomes blocked. It'll be interesting to see if this valve is mentioned again in a later entry. 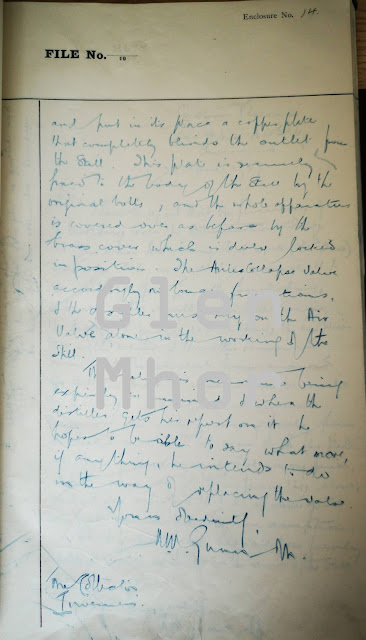 Neil is fantastic as providing detail. Almost drawing pictures in the mind of the reader without having to physically draw. A skill that would serve him well in a future role. However, here, it would be great to have that personal touch of the staff - such as names - although this is a formal log for the government officials, so fanciful trips were not permitted.

So, to give that personal aspect we much look elsewhere to identify the Stillman at Glen Mhor during this period. The first port of call would be the Inverness Directory, which I've covered in greater detail as part of the Millburn distillery website. This is something I plan to do here for Glen Mhor and have all the materials; just a case of time.

We'll try 1934-1935 and 1935-1936, which should cover all bases, just in case there was a change in role at the time. In the 1934 publication, there is only one mention of a Stillman and that's a William Mackenzie who lived at May Court, just off Alexander Place. Could this be the Glen Mhor Stillman? I know into the 1920s, a Robert Innes held the role at Millburn, but as of yet, I've not been able to confirm until when. So, it is a possibility. Also, William is on the wrong side of town for the Millburn distillery. In this publication, living at Glen Mhor cottage (81 Telford Street), is James Ritchie with the title of brewer.

The location of Alexander place is across the river from Glen Mhor and Glen Albyn, so a short walk for any employee. There's a 50/50 chance that William is our man, or even James if he wanted a different title.

Moving forward a year, into the 1935 publication confirms that William hasn't moved and remains the only mention of a Stillman in Inverness. James also remains the solitary brewer, living it up in the Glen Mhor cottage. It seems unlikely that both distilleries (which came under the same ownership in 1920), only had a single Stillman between them? I'll put this into the further research folder for future updates.