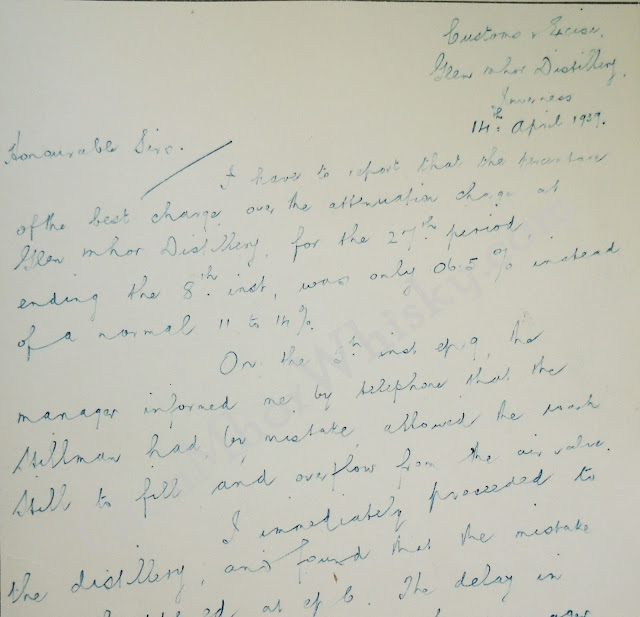 This is in the back of my mind, as we enter 1939 and what was a tumultuous for the world at large. However, we're just focused on a small section of it; a distillery in Muirtown, on the edge of a rapidly expanding Inverness. Engaged in the production of its own whisky and making a name for itself.

My interest is what the forthcoming pages will note or record about the war on the impact it had on Glen Mhor and production. However, for this entry, we're still a couple of months away from war being official declared.

While this wouldn't hit product for sometime yet, it will have forced Glen Mhor to look closer to home for some of its production needs. Still, we're getting ahead of the times and on 14th April 1939, there was an event at the distillery that is forever captured across several pages by the Exciseman. I'm pleased to be able to take you back in time, with the accompanying thoughts of Alan Winchester and input from Dave of the Inverness Local History group. As these pages give us much more than just a mere accident.

I have to report that the percentage of the best charge over the attenuation charge at Glen Mhor Distillery. For the 27th period ending the 8th inst, was only 06.5% instead of a normal 11 to 14%.

On the 5th inst ??, the manager informed me by telephone that the Stillman had by mistake allowed the Wash Still to fill and overflow from the air valve.

I immediately proceeded to the distillery, and found that the mistake had happened at (approx. 6???). The delay in informing me was due to the manager being from home.

I examined the Wash Charger, the Wash Still and subsequently the rest of the premises.

1. Findings with regard to the Wash Charge, Wash Still and overflow.

(a) The Stillman, thinking there was only one charge (16") in the Wash Charger, whereas there was two charges (32") turned on the discharge cock, and left the vessel to empty and proceeded to burrow out ashes, and trim the ash dump.

When he returned the was pouring out of the Air Valve, and the platform and Stillhouse floor as far as the Mashtun was covered with wash.

Before my arrival at 9.15 he had swept a great deal down the drain, but there was still a quantity under the furnaces and round the Mashtun and Underback. The floor of the Stillhouse and the platform were wet, and the side of the Wash Still bore traces of the overflow.

2. Examination of the rest of the premises.

On the completion of the above examination I proceeded to examine the Spirit Receiver pipes, safes and their connections, Feints Rec & Charger & pipes and the Spirit Stills, and found all these vessels and pipes secure, and no evidence of interference with any of them.

I then proceeded to make an inspection of the distillery premises and found them regular in every respect.

I dipped and took the gravity of to B no.8 and found them the same no on my Ep? 5 survey.

3. To find the quantity of wash lost on the 8th inst I had the Wash Charger filled with water to a depth of 34".

The Wash Still was then filled from the Wash Charger until the water overflowed through the Air Valve. The depth of water remining in the Wash Charger was 14.4" - approximately the quantity of wash lost less 2.6" residue = 1762 gallons. Attenuated 57.5" = 167.3 proof gallons spirits chargeable from attenuation which added to the best charge 2305.7 = 2473.0 giving a normal percentage over the attenuation charge of 14.2.

From the examination of the premises and the investigations detailed above I am satisfied that the wash was genuinely and wholly lost in the manner stated, and that none was removed from the premises.

I am also satisfied that there was no abstraction of wash, feints or spirits during the period April 3 to April 7 1939, and that the loss of wash from the overcharge of the Wash Still accounts for the low percentage.

I am honourable Sirs,

The Honourable, The Commissioners of Customs Excise, London'

The number of these papers should be noted in the books and documents affected. No further action is necessary.

Approved as sub matter above. 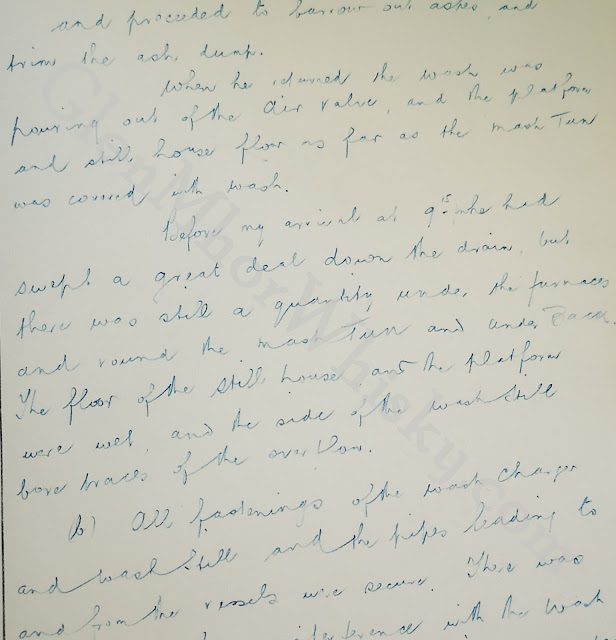 This is a very revealing account, as it shows the chain of command. In a previous entry, I had joked to Alan Winchester that the unfortunate distillery worker responsible for a prior spillage, might have been sent to find the Exciseman as part of his punishment and learning process. However, in this specific entry, it is clear there is a chain of command, and the distillery manager has the task of contacting the excise representative, despite the urgency of the situation. By telephone as well, which suggests he was not present at the time at Glen Mhor or Glen Albyn.

We do know that there were cottages on site at Glen Mhor and Glen Albyn. Referring to the Inverness Burgh Directory for 1939-1940 for more insight, we can see a joiner (Thomas Perrie) is recorded as being resident at the Glen Mhor Cottage, John Birnie is listed as managing director at the official office on Telford Street. Also, listed as living on what in effect is the Inverness version of a distillery street, is Duncan Cameron (maltman) and Kenneth Mackenzie (mashman).

Thanks to Dave from the Inverness History Forum for getting in touch with me after being inspired by my recent article on the Stillman vacancy in 1895. I've been using the Burgh records (new page just launched), but he has access to the street directory, which runs up until the 1940s. So, this is a whole new resource for establishing distillery workers.

In this new resource, it confirms a William MacKenzie being the Stillman in the 1901 and 1905 editions. He could be Glen Albyn, but living at 27 May Court, which Dave explains:

'May Court is a fair hoof from either Distillery location, being the tenement/flats off Young St opposite King St but I would presume WMcK worked at GM or GA in view of Robert Smith living at Diriebught Rd (for Millburn?).'

Fascinatingly, William was in the role for a considerable period of time, whichever distillery he worked at:

'I see William MacKenzie was still a stillman (and still at 27 May Court) in the 1937 edition (and then in the 1939 one the occupant of 27 May court is a Miss MacKenzie, which tends to suggest William had died in the interim  - but there is no mention of any stillmen in that edition, and the next one I have is the 1942  when the sole holder of that title is KENNETH MacKenzie, residing at 79 Telford St (i.e. on Distillery land).'

There's also the suggestion of a generational aspect, I do remember a quote from William Birnie that the distillery workers were often related, families in fact and the baton being passed to the next generation. This would have been commonplace across Scotland, and we know that William's own family had a strong distilling heritage, as show in this obituary for a William Birnie on Speyside in 1900. This is likely to have been his uncle and who he was named after by his father, John, who was originally a distiller at Benrinnes.

Dave rightly points out, that there are 10 pages of Mackenzie's in some of the editions, making is the Smith surname of the Highlands. However, there remains a possibility that William and Kenneth were related in some form.

We've seen that Kenneth was listed as a mashman just a couple of years prior to appearing as a stillman in Dave's research in 1942. The War will have limited records at this time. However, it is clear that Kenneth was prompted at some point shortly prior to 1942 and that William Mackenze was sadly no longer listed around this time after his career in distilling coming to an end sometime around 1937-1939. 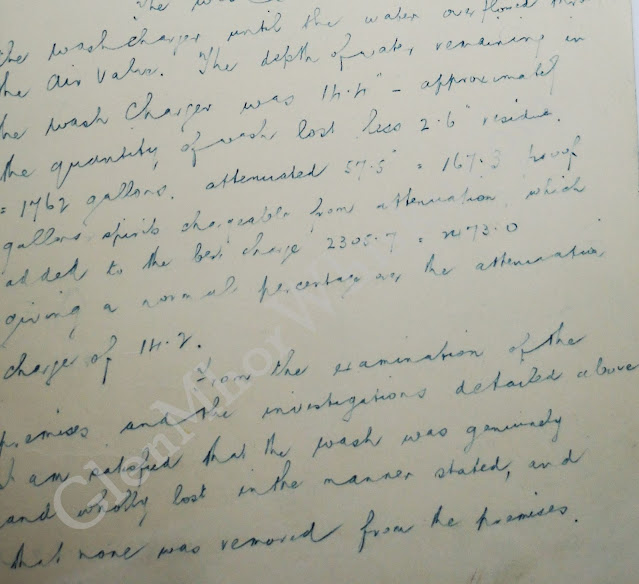 On a side note, the war restrictions at Glen Mhor came into effect in 1943, let's return to this specific logbook entry and a new discovery.

We do know that the grander of the distillery cottages was Glen Albyn house, and this was utilised by the distillery managers. In 1938 and 1939, the occupier of this address is James Ritchie, who is listed as a manager. Therefore, it is very likely that a distillery worker was dispatched to Glen Albyn house to find James, who promptly made the call. I would also be confident in saying that James was the successor to Robert Robertson, who passed in October 1937. It seems unlikely there would have been a short-term replacement for such a quick appointment.

This opens up a whole new avenue of research into James Ritchie, who I can reveal was noted to be a brewer living at Glen Mhor cottage in 1935. Another position of prominence and progression from this role would have been to distillery manager. Also meaning that the unidentified Stillman in this 1939 entry (possibly a Mackenzie), employed at Glen Mhor, may have only been in the role for just over a year, if that.

Returning to the above accident, I asked Alan Winchester for his expert opinion, and I think he was just as excited by this entry:

'Oh, dear what a mess, your idea of inexperience is probably a good point.
The reporting procedures would have been via Management, so the stillman would not have permission to directly phone the C & E, indeed that may still be the case.
As a stillman he should have checked all the vessels at the start of the shift, in our era of manual stillhouses, we had to record all the levels, by dipping them.  By assuming that the wash charger was half empty, and leaving the still charging to tidy the ashes, is odd.  The word charge is the volume to fill a still, and dates from a bygone era when the fill of the still was liable to tax = charge.
The checking by the Officer would be fairly standard, that's why they were known as "Gaugers", they have to satisfy themselves that this was not covering up from some form of illegal removal. I like his simple way of checking how much was lost.
Seems to have gone very high The Commissioners!!!
I wonder how the stillman was dealt with?
If they had air cran closed the quantity of liquid could have resulted in the bottom of the still, pushed down with extra weight i.e., a fallen still, when the bottom of the pot sinks.'
A great entry for sure and a fine way to end 2022 and this research project, as we pause and recharge for what promises to be an exciting year ahead.
This Log Book comes from the Highland Archives Centre (HCA/D31/4/1/25) and is watermarked for its protection. As with any images on this website, please ask first before using and always give credit. My thanks to the Centre for their assistance.
Labels: 1939 Customs and Excise Glen Mhor james ritchie kenneth mackenzie stillman