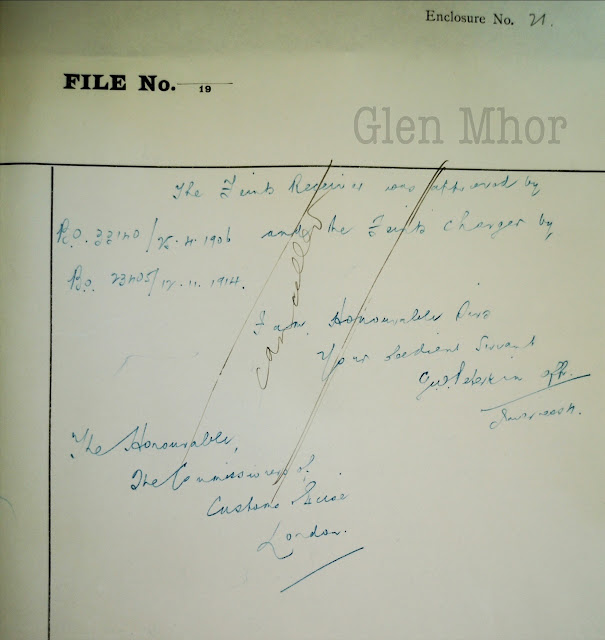 Given the nature of the logbook it is surprising that several pages have clearly been torn out. This could be for a variety of reasons with the most likely candidate being the counterfoil nature utilised to record each entry. A mistake or inconsistency would have been permanent, with no ability to tap the delete key (if such a thing existed!) or a drop of Tippex. So, the most likely course of action if the mistake was large enough, was the rip out the page itself and start again, which brings back memories of the classic Orange Juice song.

This entry on the 26th of January 1938, suggests another possible source of removed pages and that's requests being cancelled. For some reason the page itself has been defaced with cancelled across the page as you can clearly see. Fortunately for us, the page remains, so we have to consider what this request was and its purpose and what delights we have for you in this cancelled page, as it gives us insight into the deployment of the stills themselves.

However, the next page (recorded as 28th January) actually features the corrected version of this entry (raising the question as to why this faulty account was left in situ), there are two corrections, commencing after the 3018 gallons figure, highlighted by ¹ which now reads as accordingly 1443 gallons was collected in the Feints Receiver and 1575 gallons in the Feints Charger.

The other correction relates to attenuation charger statement shown as ² and should read as 16.9, and not normal as originally indicated. I've left the original cancelled as it stands below: 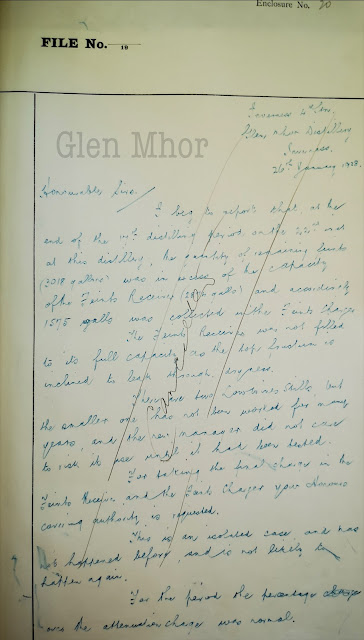 I beg to report that at the end of the 17th distilling period on the 22nd ?? at this distillery, the quantity of remaining feints (3018 gallons)¹ was in excess of the capacity of the Feints Receiver (2874 gallons) and accordingly 1575 gallons was collected in the Feints Charger.

The Feints Receiver was not filled to its full capacity as the ?? ???? is inclined to leak through dryness. There are two Low wines Stills, but the smaller one has not been worked for many years, and the new manager did not care to risk its use until it had been tested.

For taking the final charge in the Feints Receiver and the Feints Charger your Honours covering authority is requested.

This is isolated case and has not happened before and is not likely to happen again.

For the period the percentage charge over the attenuation charger was normal².

I am Honourable Sirs

The Commissioners of Customs Excise, London.'

Even though this request was seemingly cancelled, it does provide some fascinating detail for us to consider. Firstly, as noted just a couple of weeks prior, former manager Robert Robertson had passed. The above entry confirms a new manager was in place within a matter of weeks, which would suggest he came from within the existing ranks of Glen Mhor or Glen Albyn.

In addition, the new manager was already making changes and assessing what was at this disposal. This includes the dormant Low Wine Still, installed when Glen Mhor was founded in 1894, which we never knew until now, had not been used in several years. I had suspected it, after all, the distillery as far as we know has never run triple distillation. The new Still was introduced in 1925, as part of a series of upgrades to boost production and its size was around 50% larger than its forebearer. Now, we have confirmation that the original Still sat idle, likely shortly after this new arrival was brought into production. So, it seems reasonable to suggest that the smaller Low Wines Still had been inactive for over a decade.

Clearly, the new manager wanted to ascertain the status of the original Still, perhaps if repairs were required for its replacement. I've made preliminary enquiries to identify who the new manager was without success. It looks like the advent of the Second World War put an end to the Inverness Burgh Directory - for obvious reasons - which has been a valuable resource. However, we'll track down that bit of detail with ongoing research.

This Log Book comes from the Highland Archives Centre (HCA/D31/4/1/25) and is watermarked for its protection. As with any images on this website, please ask first before using and always give credit. My thanks to the Centre for their continued assistance.