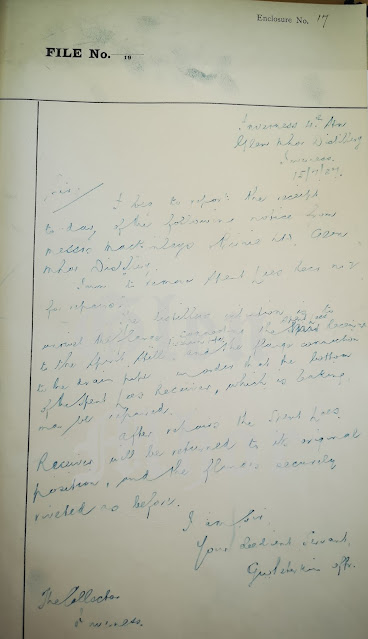 What is becoming clear in our research is that the smallest of details within these logbook entries can shed new light on Glen Mhor and the practises at the distillery. Only through this research, investigation, debate and retrospective analysis, can these tiny snippets add up to new appreciation.

Take for instance this entry relatively rudimentary entry from the 15th of July 1937:

I beg to report the receipt to draw of the following notice from Messrs Mackinlay & Birnie, Glen Mhor Distillery.

?? to remove spent Lees Receiver No.2 for repairs.

After repairs the Spent Lees Receiver will be returned to its original position, and the flange securely riveted as before.

I am Sirs, your obedient servant

To the majority of readers this looks like a routine repair on part of the piping that linked the stills to the spirit receiver. Nothing major or revolutionary then surely? Then, you take it the next level and ask Alan Winchester for his thoughts and a whole new level of appreciation begins to take shape...

'Interestingly there is 2 spent lees receivers’ has me wondering if this was the siphon device, that had been fitted to each discharge of the Low wines stills, it left the bottom of the still covered with liquid, to prevent excessive heating on the bottom of the still. To drain the siphon pipe there was a customs and excise lock, as they could carry out checks on the alcohol, in case revenue was being lost.  These are hardly seen now.  I wonder where the spentlees went, sea?'

Picking this up with Alan further, I enquired if this device and approach was purely to protect the lifespan of the still? 'Yes, it was to protect still.'

You'll recall that most distilleries in this era only had a single set of stills and these in many cases endured until their closures in the 1980s. Of course, most switched from direct heating decades prior, with Glen Mhor doing so in 1963, but even so, that's almost 80 years endured of direct flame from a coal stoked furnace. As far as we know, the stills at Glen Mhor were never replaced during the lifetime of the distillery - so whatever they were doing worked. So, the presence of the siphon pipe was part of this protective approach. We'll see if it is mentioned again in our exploration of this logbook, which takes us just into the era of steam heating at Glen Mhor.