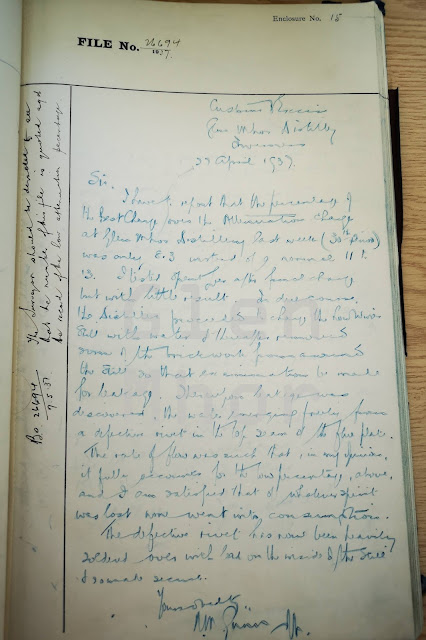 We're continuing to explore the Glen Mhor Log Book (Highland Archives HCA/D31/4/1/25) and the next entry in the log takes us into 1937 and is the last penned by Neil M. Gunn himself who left his role that year to become a full-time writer.

In this entry, Neil records an issue with the Low Wines Still that required further investigation and it is a fascinating insight into the distilling issue and the importance of record keeping; particularly when the possibility of unaccounted spirit is at the heart of the matter.

I have to report that the percentage of the best change over the attenuation charge at Glen Mhor Distillery last week (30th Prior?) was only 8.3 instead of a seasonal 11 to 13.

I listed spent wines after final change last with little result. In due course the distillers proceeded to change the Low Wines Still with water thereafter removed some of the brickwork from around the still so that the examination be made for leakage. There upon leakage was discovered. The water was emerging freely from a defective rivet in the top seam of the flute plate. The rate of flow was such that, in my opinion, it fully accounts for the low percentage  above and I am satisfied that of whatever spirit was lost none went into consumption.

The defective rivet has now been heavily soldered over with lead? on the outside? of the still and so made secure.

The surgeon (surveyor) should be directed to see that the number of this file is quoted ?? the record of the low attenuation percentage.'

To put this entry and the issue into context, I asked Alan Winchester for his thoughts on it, including the design of old stills and the use of water to find a leak. I'm thankful as always for his input and really bringing these logbook entries to life.

Firstly, an image of the Low Wines Still that was potentially the source of the investigation. Glen Mhor had 2 such stills both listed in our Distillery Info section, the original from the 1890s you can see here.

However, the leak source could well be the 3rd lost still, that you may have seen mentioned in various books, but its actual specifications and shape were unknown. Most only refer to it as being installed in 1925. That is until we identified this image taken in 1946, as being the missing still, which funnily enough features the distinctive presence of William Birnie, who Alan mentions. Then, just a couple of months later, this second image was found from the late 60s: 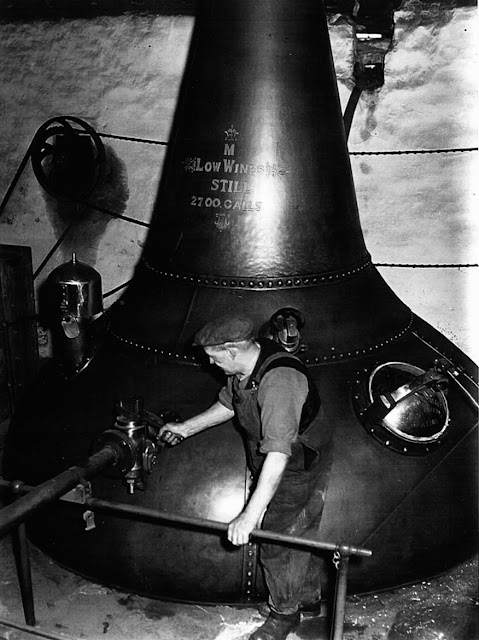 You'll notice the rivets across the still, with the potential leak being underneath the platform where the bricked area would be. Over to Alan for his thoughts:

'This is interesting, though modern stills do not have rivets, they can still leak.
What has launched this investigation, is that an old requirement of the Customs and Excise, was the attenuation charge, the word charge means that if this figure was not met without a satisfactory explanation, the distillery was liable to be financially "charged" for not making the figure, but Neil Gunn describes that the spirit has not been consumed. The charge dates from the late 18th Century.
I have lifted this quote from a book "Attenuation; The measurement of the decrease in specific gravity of worts over the course of fermentation.. Eg. if the original gravity, taken just after the filling the washback, was 1.055 and the final gravity taken at the end of the fermentation was 0.998, then the attenuation would be said to be 57 degrees.  For every 100 litres of wort attenuating through 8 degree, approximately 1 litre of alcohol should be produced".
Now, they would be using the old Imperial measurement at the time, and in William Birnie's leaflet he wrote he explains it.
Now in reality this was normally not an issue and as Gunn records the normal range was 11 to 13 % above, but a decreasing figure indicates a loss, which the Officer would have to explain, it is not a surgeon in the margin but The Surveyor, who Gunn as Officer would have to report to, and as you can see there appears to be a rigid reporting procedure. Gunn is satisfied that the excise has not been defrauded, and that the failure to reach the normal range would not be a charge, i.e. the Distiller paying the duty on the lack of spirit, but he would require The Surveyor to countersign the decision.
As the officer he says he checked the spent lees, this is to see if there was spirit left in the spent lees, this in case the Stillman's hydrometer was faulty.
I remember when we had direct fires we would lift the rope round the still, and if a Low wines feints still was leaking you could see the liquid on fire, yes when the stills were off on a direct fire still we filled them with water just like Glen Mhor had done.
The loss could have been a leaking worm or valve, but they seem quite focussed on the leaking rivet.'
So, there you have it. The leak was identified and resolved with great impetus. We've only seen in just a couple of pages in our logbook evaluation, that these stills were constantly monitored, issues promptly reported and addressed. The professionalism of Neil is here to be seen and the skill of the distiller (the identity of whom we speculated upon in a previous post) in finding the source of the leak.
Neither of the wash stills would be replaced during the lifetime of Glen Mhor, meaning the original wash would be nearly 90 years old by the time the distillery was closed. This wasn't unusual as many of the distilleries that closed in the early 1980s required major investment and retained their original stills. The 3rd Glen Mhor still was a relative teenager, coming in at 62 years of age. What will be interesting as we go through this log into the 1960s (when it concludes) is to see if more repairs were required as the years went by.