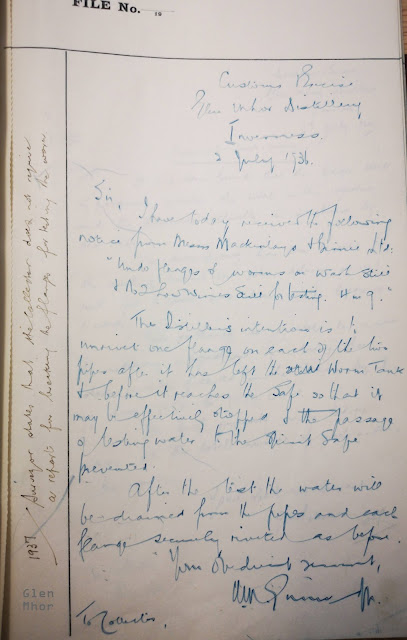 As previously reported, we have access to a distillery log book (Highland Archives HCA/D31/4/1/25) for Glen Mhor that covers a sizeable period at the distillery, from the mid-1930s onwards, and also features some entries from the remarkable Neil M Gunn, in his pre-writer role as a member of Customs and Excise. Glen Mhor was his last post before deciding to make a go of writing full-time and we're extremely fortunate to have his last year or so, forever captured on these pages.

The ambition is to decipher the log and bring new detail to the everyday existence of the distillery, hopefully with new nuggets of information and continuing the comprehensive work to date. All of these pages will appear under the Customs and Excise label

1936 isn't a year that has featured in our timeline as of yet, so these subsequent pages might put something on the map - all entries will feature on the timeline going forward. I've transcribed the entry and an additional comment from 1937, which suggests the log doesn't need to be completed for this time of work.

I have today received the following notice from Messers Mackinlay & Birnie Ltd:

'Undo ?? of worms on wash still and No.2 low wines still for testing'

The Distiller's intention is to ?? one flange? on each of the two pipes after it has left the Worm Tank and before it reaches the Safe so that it may be effectively stopping of the passage of testing water to the Spirit Safe prevented

After the test the water will be drained from the pipes and each flange? firmly riveted as before.

Also, it is worth noting an additional entry (dated 1937) in the left margin that reads:

To make sense of this page and what was planned in July 1936, I reached out to Alan for his distilling input on what was taking place in this entry, many thanks for this insight:

'What you have here is a fascinating glimpse of a routine operation at the distillery of that time. I presume by the date the distillery would be in silent season, this specifically is looking at testing the worms for a leak, i.e. by blanking the tailpipe. Just as an aside l would have expected that they may have cleaned them. Some of the distilleries would empty the worm and fill with water to test the worm, for leaks. Also of interest is that they specifically mention that it’s the wash still and no2 low wines still, no mention of no 1 low wines still.  They correctly use the terminology, these days they are referred generally as spirit stills.  Also, the senior officer has decided not to require reporting upwards.
Some distilleries installed a valve and drain valve to allow testing of the worms, and these were sealed by a customs and excise lock.'
A fascinating look into a routine practice of the period. What else resides within the pages of the log? We'll find out in due course.
Labels: 1936 Customs and Excise Glen Mhor Neil M Gunn