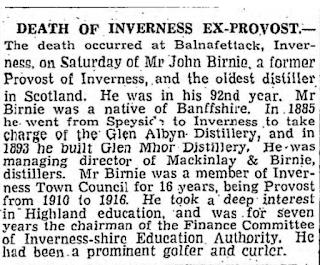 It seems the passing of John Birnie was a little premature!

Imagine our surprise when the co-founder and distiller of Glen Mhor, was noted to be in attendance when the Food Minister for the UK government was on site in August, 1944.

With an obituary in the Scotman, confirming his passing on 23rd February 1946, we've updated the distillery timeline. The Press & Journal article that suggested a date in 1930 has been misfiled and dated in the records.

The obituary is helpful as it confirms John came from Speyside to Inverness, thereby taking up his role at Glen Albyn. We'll be researching his past more to confirm what distilleries and experience he had, prior to moving to Inverness.

Passing at the age of 92, he was noted to be Scotland's oldest distiller and hopefully, someone we can pay credit to with our research.

In our newspaper section, we've reached the end of World War 2 and the option for Glen Mhor to restart production. There's plenty of further detail to come!