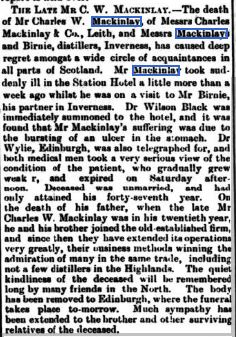 From the Inverness Courier in January 1896, we've added this article to our Newspaper section which confirms the passing of Charles W. Mackinlay on a visit to Inverness.

He was the brother of James Mackinlay and also involved in the family whisky firm. We also have to thank him for the creation of Glen Mhor, as according to a later newspaper article and his brother James, it was Charles that introduced him to James Birnie and the rest they say is history.