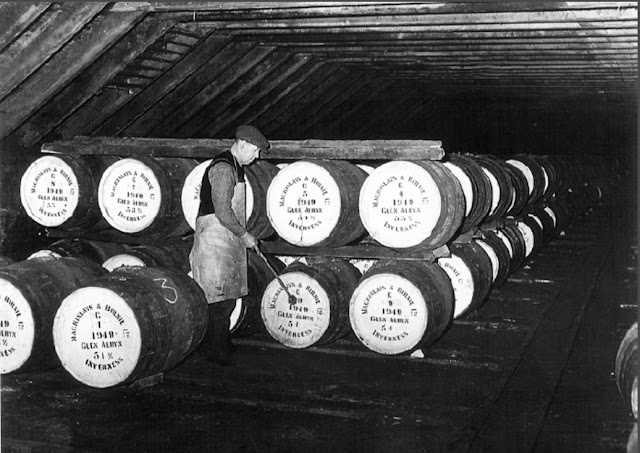 Finally, we're into the warehousing. This image comes from Gavin D. Smith's Stillhouse Stories Tunroom Tales, published in 2013 and features the memories of a former worker,  Rodney Burtt. It is an important record of working at the distillery, which deserves further analysis in future posts. Thanks to Rose for highlighting this important record.
Included in his recollections are several images which allow us to see into the distillery. We know that warehousing was shared by both distilleries, as Glen Albyn was on the larger site and had more storage capacity. This could be one of the warehouses that backed onto the football ground and the suggestion of the roof angle would make that a possibility alongside the Glen Albyn warehousing on the far left edge of the distillery site. We'll never know, but it is good to see inside.
We cannot precisely date this photograph, but you'll note the Glen Albyn casks look fresh and come from the 1949 season. It would be reasonable to expect this to be taken in the 50s as the casks are at the front. Both distilleries shared their warehousing as the company did not own any other distilleries. In total, there was room for 60,000 casks and when the distilleries closed, 40,000 casks had to be removed.
Labels: closed distillery Distillery Glen Albyn Glen Mhor Inverness Still House Stories Tunroom Tales warehouse