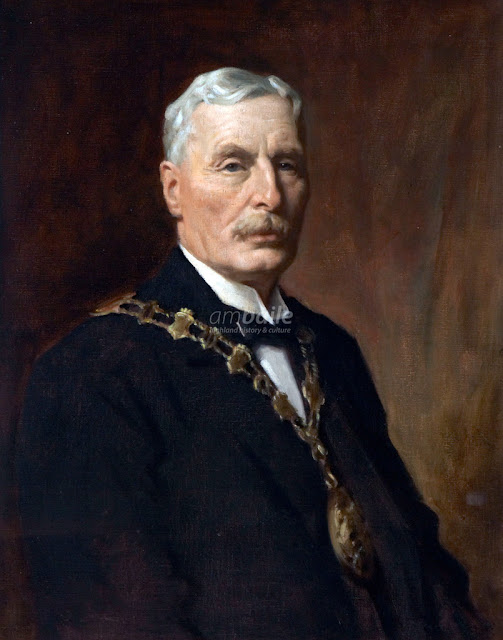 This portrait of John Birnie by George Fiddes Watt in 1916, now hangs in Inverness Town House, where John's service to the people of Inverness is remembered to this day and has been added to our photograph section. You can read about his service via Ambaile which contains a few interesting snippets of information.

We already knew he came to Inverness to take over the role of distillery/manager of Glen Albyn distillery in 1885. We now know that he was previously employed by the Benrinnes distillery on Speyside for 8 years from 1877. Prior to his work as a distiller, he worked for the Royal Bank of Scotland for 5 years and was born in Banffshire in 1856. These details will guide us towards more information about his life.

We're also building a picture of a strong, robust, characterful style of whisky. Benrinnes to this day, is known for its style which deviates from the more approachable Speyside house style. Glen Albyn to a certain degree as well, although I've always found it to be more immediate and palatable. Some have speculated that John copied what he learned at Glen Albyn, to create Glen Mhor. However, I believe it is more his combined experience that helped produce the style we associate with Glen Mhor, today. The presence of Robert Robertson as distillery manager, likely a selection by John, who had a distilling background (unlike Charles Mackinlay), from the formidable Mortlach distillery, would suggest a style of whisky they were trying to create.

Robert was the first distillery of manager of Glen Mhor and remained in this position, living on-site, for an incredible 43 years until 1937. Another individual we will have to research when the time allows.