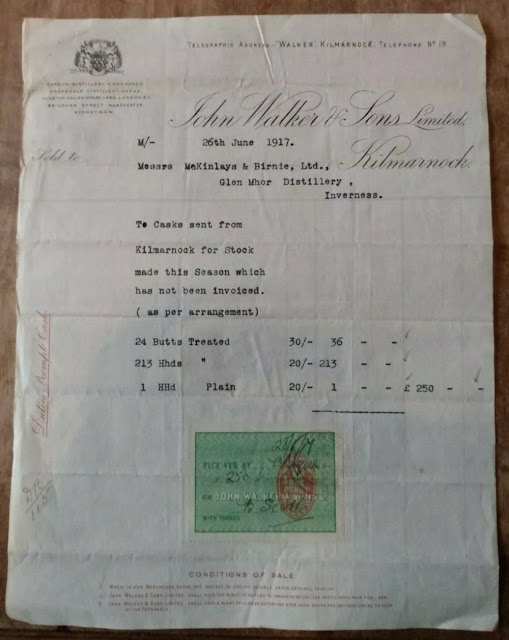 We know the interests of John Walker & Sons of Kilmarnock and Glen Mhor intertwined from an early stage. As blenders of stature, both John Walker and Mackinlay's would have bought, sold, traded and blended stock from distillery across Scotland to maintain their blends.

What's known about the relationship, is that it formally commenced in 1906, when the Walkers took a 40% interest in Glen Albyn, which was eventually taken over by Mackinlay & Birnie in 1920. A shared interest continued until DCL/SMD acquired both distilleries. However, it seems likely that the Walkers were buying from Glen Albyn and Glen Mhor prior to taking up any interest in either distillery.

Glen Mhor was a malt highly regarded by blenders, and formed the basis of the Mackinlay's Rare Old Highland Malt; bottles of which were famously found in the remnants of the Shackleton South Pole Expedition base.

This order in 1917, for over 230 barrels to be filled, must have been substantial and underlines the above. Including in this are treated butts, which gives us confirmation that Glen Mhor was using sherry casks at an early stage. The Shackelton bottles which date from 1907, were scientifically examined and confirmed to include American white oak sherry casks.

The suggestion is that the order is for the season, and the timing is of interest, as this would have been very close to the arrival of the US Navy, who took over both distilleries in February 1918.

One this is for sure, this won't be the last time we mention the Walkers when researching Glen Mhor.

Our thanks to Distillery View for this fascinating invoice.