The beginnings of Glen Mhor 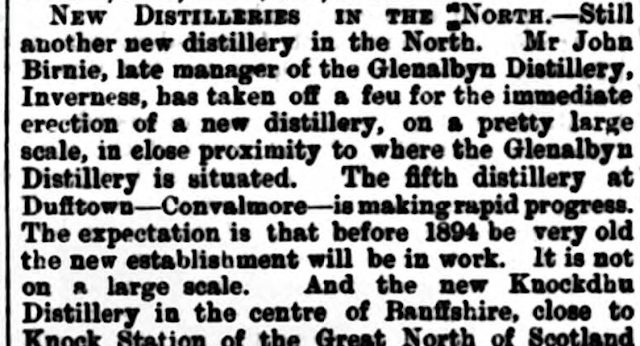 We've just added this newspaper article which highlights the boom in distilleries across Scotland. It's our earliest article so far, regarding Glen Mhor distillery, which hasn't even been named, dating from November 1893.

History has told us that John Birnie as the distillery manager of Glen Albyn wanted shares in the business. When this was refused he left to start his own distillery, which was soon to be next door. We've yet to research this prior employment and departure, but this article gives us the indication that John wasn't a man to sit around. By the end of 1893, he had already secured the site for a 'pretty large distillery'.

We also know through our research that John had been introduced to his future partner, Charles Mackinlay, in 1892, by Charles' brother who sadly died at a young age. The article itself doesn't give any indication of the status of the construction. However, we do know from our timeline that the partners had founded the distillery in 1892, meaning by the time of this article in the Banffshire Advertiser, work would have been well underway.

Interestingly from our timeline, you'll see that the Inverness Dean of Guild Court approved a distillery known as 'Glen Mhor' as early as 1886. Who made that application and its details are currently unknown, but we love a challenge!