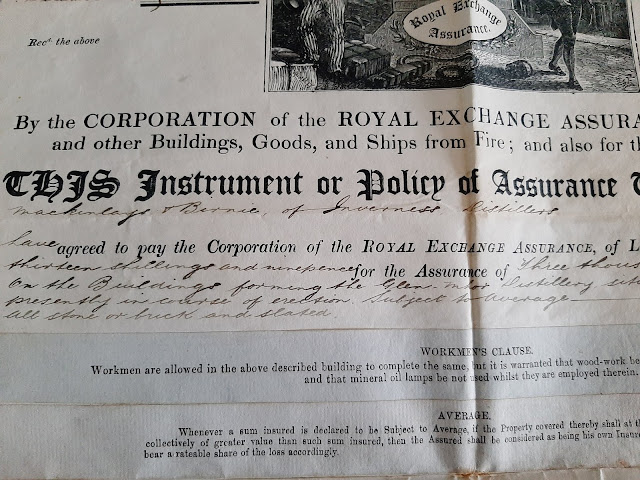 Here we have an extremely important document for any distillery - the fire insurance protection. Distilling is littered with tales of distillery burning down, accidents and rebuilding. This danger continued into the next century, with Banff perhaps being the most famous exponent, but also more recently at Talisker in 1960, which is the latest and hopefully the last such event.

Brokered by the Glasgow office, for the sum of 13 shillings and 9 pence, in 2017 this is equivalent to around £57. What's interesting about this document are the dates. Spanning 18th June 1894 to 18th December 1894, it covers the initial 6 month period of its existence. The official date of Glen Mhor starting production is 8th December 1894, however, we know the distillery was advertising draff for sale as early as September 1894. So, it seems reasonable to expect that various trials were taking place prior to the official date. The document also suggests the erection of the distillery, which by June 1894 should have been well-formed.

Glen Mhor of course would have the modern invention of electrical lighting by 1896, so the risk of fire was minimised again. Fortunately, it never experienced a fire event of any kind that we know of.

My thanks to Distillery View for this document and you can see the full image in our Documentation section.