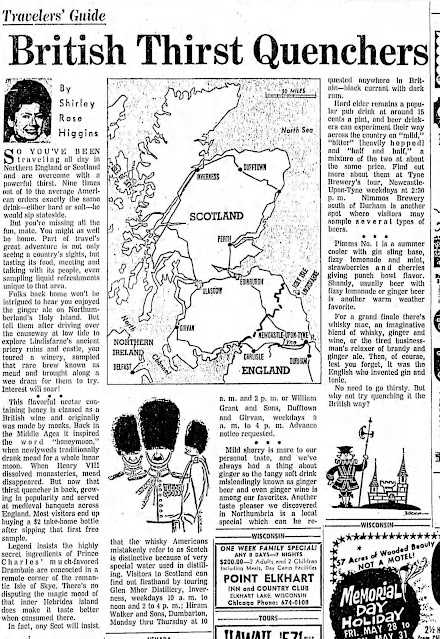 'Visitors to Scotland can find out firsthand by touring Glen Mhor Distillery, Inverness, weekdays 10am to noon and 2 to 4pm.'

A promotional mention in an article highlighting travel to Scotland and whisky. What's interesting is that it confirms tours were being offered in 1971, which is unusual. Many distilleries had not yet thought about whisky tourism or the potential to offer tours.

This puts Glen Mhor amongst the first to do tours, Glenfiddich in 1969 claims the outright title, it might have not had a dedicated visitor centre (Glenfarclas was one of the first to build such a building in 1973), but it proves how forward-thinking the independent owners were. This is something we're seeing throughout the history of the distillery with a water turbine, electricity and the Saladin maltings.

Offering tours could also be the knock-on effect of struggling to find orders for filling? Onsite sales are unclear, but it also gives us the possibility that the distillery gates were unlocked to visitors for a short time at least, with DCL taking over in 1972, when these tours would have been no longer supported.