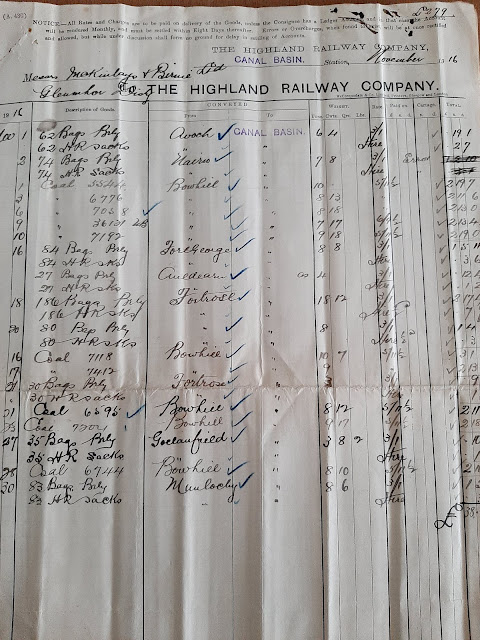 Here's another fantastic find from Distillery View which dates from November 1916.

This shipment predates their ownership of Glen Albyn, so we know it's all for Glen Mhor. Included on the invoice is a range of barley sources including Avoch (Black Isle), Fort George, Fortrose, Munlochy (Black Isle) etc. - local barley in effect.

You'll be asking what's a HR sack? And how big is it compared to a bag of barley? Very good questions. The working theory is a HR sack is effectively the Highland Railway sack size. And this would translate into a bushel of barley, around 48lbs in weight.

What about coal from Bowhill?

Now, there is a Bowhill in the Borders area of Scotland, but I believe the name refers to the Bowhill mine in Fife, also known as Lady Josephine, located in Auchterderran, which was only open for 66 years. It makes sense as Fife was a major source of coal, with this particular area of the county being home to several large scale mining operations.

It's also worth considering where this fits into our Glen Mhor timeline. Namely, the First World War is well underway, the distillery is having to rely on more local resources such as barley. We know from our previous research (also in our Documents Section) that the distillery used 52% Scottish barley during 1916 and in 1914 was 100% Scottish barley, when the war commenced.

Soon, all shipments to Glen Mhor would stop, as the distillery along with Glen Albyn would become a base for the US Navy.