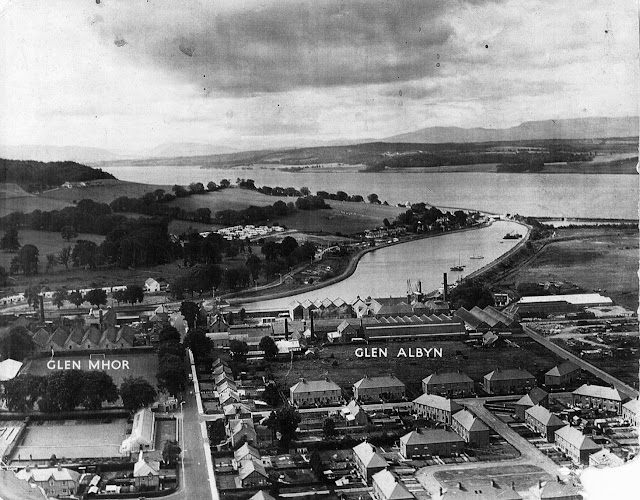 A photograph that speaks a thousand words...

This image comes from the collection of Rodney Burtt and his original notes are:

'Aerial view of Glen Mhor and Glen Albyn looking northwest along the northern end of the Caledonian Canal, flowing into the western extremity of the Moray Firth, the Beauly Firth. Strathpeffer lies 20 miles away just to the right of centre.'

We know various aerial shots were taken in the 1980s, but the buildings behind Albyn don't feature the apartments that are apparent on images from this period. So, it is earlier. The football ground gives us some clues as there were various fires and rebuilding/repositioning of stands. So, I'd put this 1930s-1950s for now, noting there is no writing on the warehousing, which does feature in later decades. The football ground does give us a clue, as you can see the single grandstand, which was destroyed a couple of times by fire. Meaning, this particular edition puts the photograph between 1926-1950 - you'll see it in the photographs we've already dated.

You can appreciate the road that divided both distilleries, which was the forerunner to the A9 and the main route north. My research has highlighted by chance it was a right pain to cross as well.