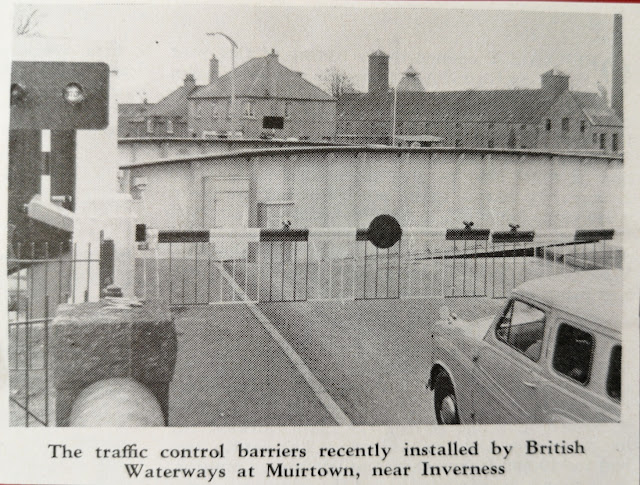 One of the advantages that Glen Mhor offers us as a lost distillery, is that it was surrounded by landmarks and places of interest. Apart from the nearby distillery in Glen Albyn and the unique aspect of having 2 distilleries divided only by a road, you had a football ground behind the distillery and the Caledonian Canal on the other side.

In addition, the Muirtown basin, further along, offers more potential photographs from those taking in the view or loch gates without realising the distillery aspect. The Muirtown swing bridge is another area of interest, which has paid off today.

Built in 1938, by Sir William Arrol Contractors, who were responsible for the Forth Road Bridge, it was made of steel and for many years was the gateway to the north. It not only gives us another way to date various photographs but also offers the opportunity for more photographic discoveries. Like this one...

Recently, I was searching on eBay for various landmarks and Glen Mhor-related artefacts and this 1962 photograph from a magazine (unknown) turned up with this description:

'The traffic control barriers recently installed by British Waterways at Muirtown, near Inverness.'

Most of the auction item was blurred to protect the image from those that would rather save it than purchase the image themselves, which I can appreciate. But it seemed clear that the blurred building in the background was Glen Mhor and using existing images and the angle of view, it seemed a sure thing.

Contacting the seller, they never had considered the building in the distance, agreeing it looked like Glen Mhor and were happy to refund me if this wasn't the case. Deal done, I'm pleased to add another unseen photograph from the distillery to our Photograph section.

This image is important for several reasons:

So, keep on searching is the motto and sharing. The above capture is just my camera phone rather than a scan. I'll keep the photograph safe until more scanning is required. As for the eternal question as to what's on the back of the cutting? It's an article on the opening of the King Gustaf Adolf airport, which was opened 'this year' according to the opening paragraph, but in which year? Yes, you've guessed, correctly, 1962...
Labels: Caledonian Canal Glen Mhor Muirtown Basin Muirtown swing bridge