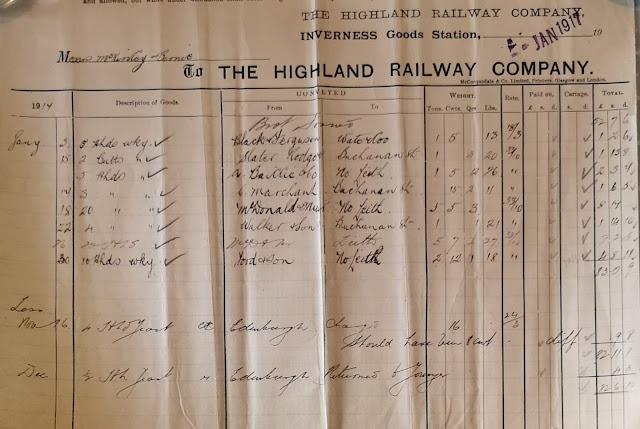 The plan is to go through each invoice in date order, noting the shipments to and from the distillery. We do know that Mackinlay & Birnie utilised road and boat as well, but the railways should give us a unique insight of not only company traffic to the blending headquarters based in Leith, but other businesses they dealt with and goods that were needed.

It's also worth highlighting that because these are all from 1917, we know that this is before the acquisition of the nearby Glen Albyn distillery. So, everything relating to Inverness will only be for Glen Mhor. And on a side note; what gorgeous handwriting! To think that these are over 100 years old, but what a minute...

What's of interest in the larger scheme of things, is that we know in 1917, the US Navy was verging on taking over both distilleries in Muirtown. The whisky from Glen Albyn was being stored at Glen Mhor by all accounts so far. However, as these invoices are specifically for Messers Mackinlay & Birnie, I believe they are relating to Glen Mhor stock. Otherwise, they'd mention the Glen Albyn Distillery Company, the current owners of Albyn at that time.

The official date of the US naval base coming online is 9th February 1918, but we know that the groundwork was laid much prior to that, with the common belief that work started in earnest in June 1917, to turn both distilleries into a naval base. This may explain why we only have a 5-month block of invoices from January to May? What will be interesting to see in the coming months, is if the number of casks being shipped increased with the looming threat of the military take over? Will incoming supplies such as yeast, barley and coal come to a halt?

So, focusing on this January 2017 invoice, the month gives us 8 shipments out of Glen Mhor, plus 2 credits for November and December. Not on the above image (but available on the full image in our Documentation Section) are some notes in pencil in the middle of the invoice. These faded notes give us the costs of transporting yeast, EGG??, WB?, coal and barley. You'll note that a previous invoice we have in the aforementioned section from 1916, actually includes these types of shipments in the main invoice. Perhaps just a change in record-keeping to keep thing simple?

Moving onto the above image, during the month of January, the distillery shipped 2 butts and 67 hogsheads of whisky, to 8 different recipients. The breakdown of which is 3 in Glasgow, 4 in Leith and 1 in Aberdeen:

Easy to think this is London, but Aberdeen had a Waterloo station on the Highland line and the city was home to the blenders of Black and Ferguson. An order of 5 hogsheads.

The heart of Glasgow's blending scene (as we'll see on this invoice), Known as Slater Rodgers & Co, they were bonded and free warehousemen. Their order is for 2 butts, proving these prized casks were being filled. Pure speculation, but possibly for retailers in the city?

The blending hotspot of Leith in Edinburgh was home to Ainslie Baillie and Co, who ordered 5 hogsheads.

An order for 3 hogsheads, need to research this entry more.

A sizeable order for 20 hogsheads. Wine and spirits merchant known for the Bailie Nicol Jarvie and Highland Queen blends at this time. They had a large bonded warehouse on Commerical Street in Edinburgh, beside the docks.

This firm needs no introduction and ordered 4 hogsheads.

After some debate, we believe this is MacDonald & Muir once again (see 18th January) and accounted for 5 hogsheads. Backing up this train of thought (sorry) is that the destination is just Leith as opposed to the earlier destination of the Port of Leith. Research confirms that the firm had 2 bonded warehouses with the smaller of these on Water Street in Edinburgh, which was further away from the docks than their Commerical Street site.

This relates to James Ford of William Ford & Sons, tea, wine and spirit merchants of Leith, who were co-owners of Bunnahabhain. 10 hogsheads ordered.

These were turbulent times for Glen Mhor. Effectively mothballed - or soon to be - with the presence of the US military. A business of some sorts was being maintained via providing for the blenders who had always sought whisky from the distillery.

We'll move into February in the coming weeks.