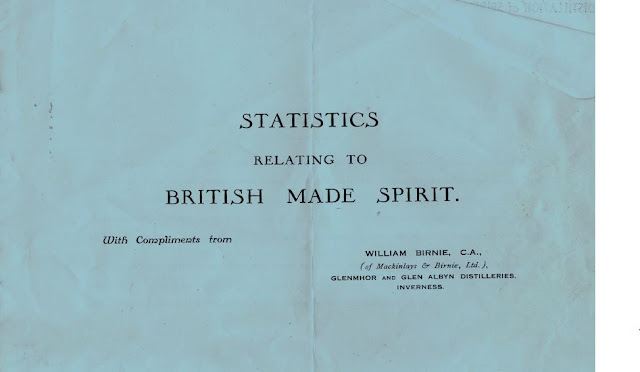 Here's a hint of what's to come soon.

We know that William Birnie was adept at figures having been an accountant. On a regular basis, he produced a set of statistics that was referred to as the Whisky Bible (yes, before the other one) based on his research. This would lead him to become very respected within the whisky industry and influential.

Unfortunately, his predictions of overproduction as early as 1962 as seen in our Newspaper Section, were not heeded and the rest, as they say, is history. But we're uncovering history right here with thanks to Alan for this image.

The rest of the report is sadly lost for now, but Alan has managed to provide us with fuller copies of Birnie's 1938 and 1946 reports. We will be publishing these shortly. As for the above report, the font and style of layout are similar to the 1946 edition and not the pre-war edition. Therefore, we can speculate a little that this document is post-1945.