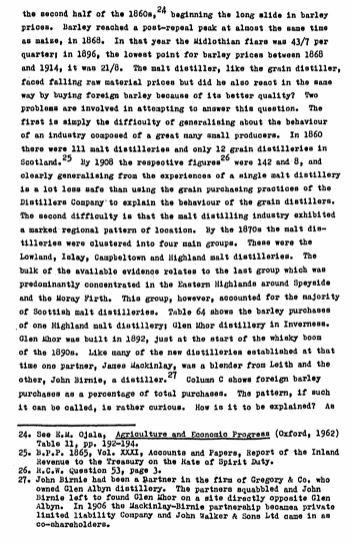 Here we have some interesting additional detail as part of the PhD of R.B. Weir, published in 1971, kindly provided by Justine.

We've already published the barley table on our Document Section, but we now have the surrounding information. The author of this report had direct access to the owners of Glen Mhor to compile this report and reference is given to the logs of the distillery.

Arguably what's more interesting is the chatter around John Birnie's departure from Glen Albyn, which previously has been word of mouth, but is now featured in more concrete detail on the page above. Squabbled being an odd word, but a parting of ways occurred and John became the distilling brains behind the project that would become Glen Mhor.

We do have a share option newspaper advertisement for Glen Albyn, the year after John left, which we will publish in due course. This outcome would have initially been the disagreement, where the then owners were only interested in John's distilling experience and bringing an upturn to Glen Albyn, but not to reward him.

The next page has an interesting aspect around Scottish barley: 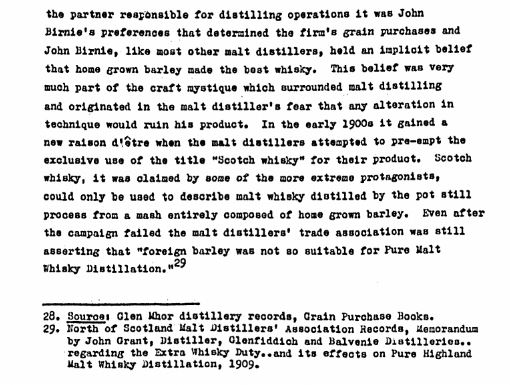 This explains why the Glen Mhor records highlight foreign versus Scottish barley, which might have been an unusual practice to maintain. However we know that record-keeping is one of the company's strongest points, so hopefully, we can locate further information.

Was Glen Mhor the first exponent of terroir? The use of foreign barley is still something that many distilleries won't discuss to this day. Perhaps the Malt Distillers Trade Association may have further information regarding Glen Mhor.