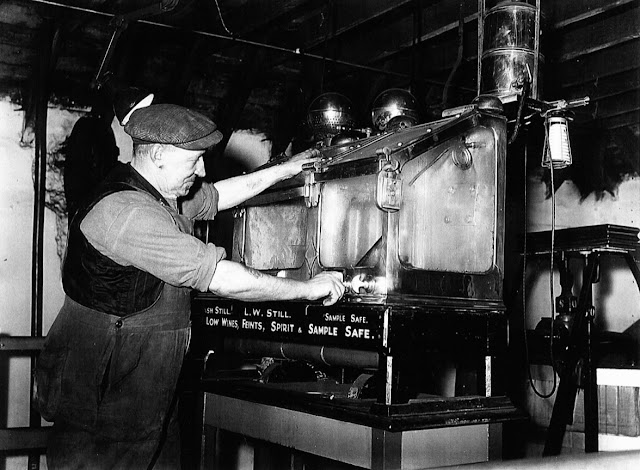 'The scene on the platform alongside the Spirit Safe is the most important part of the distilling routine. The Stillman is the highest paid employee as a result. He is checking here the readings within the Spirit Safe. He is the person who finally determines when whisky flows as authentic whisky of the correct average strength from the distillate of the Low Wines Still.'

Where is this? Well, it is Glen Mhor and we're finally able to see the Spirit Safe. As coming from Rodney's collection the chances of its being Glen Mhor are high, but we've seen the Stillman before; in our photograph of the mysterious 3rd still. It is the same person, likely photographed within a few minutes of the other photograph.

What's also of interest is trying to visualise where in the room the spirit safe was. It looks like it is underneath something and Rodney refers to a platform. We know the dimensions of this room and as always, more research is needed. Could this be Sandy Campbell? Rodney, describes him as:

'Sandy was a well-built man of rolling muscle, tending to be excessively flaccid around his neck. He wore a cap which concealed a sparse headline of tundra, and he met you with a generous, open expression, albeit with a pouting lip. Although this feature meant he could grumble and exaggerate, I found these rare occurrences. Instead, I always found him to be considerate and patient, and he taught me a great deal about both the practical and administrative sides of a typical mash house.'

The text goes onto describe the above initial quote with no name given. We know from our newspaper research that in 1975, the head brewer at Glen Mhor was Angus MacKay and he seems too slight and with glasses to be the person in the photograph. Perhaps, we're seeing his predecessor? Someone that took those decisions at the safe prior to Angus, stretching back into the 1960s and 1950s?

It's fun to speculate, it's also fun to hear Rodney touch upon the rivalry between the head brewers at Glen Albyn and Glen Mhor:

'The two brewers never met unless accidentally, and items of communication were conveyed by other people with the strict instructions, such as "Give this note to him, laddie", or "Tell him not to be so churlish!"'