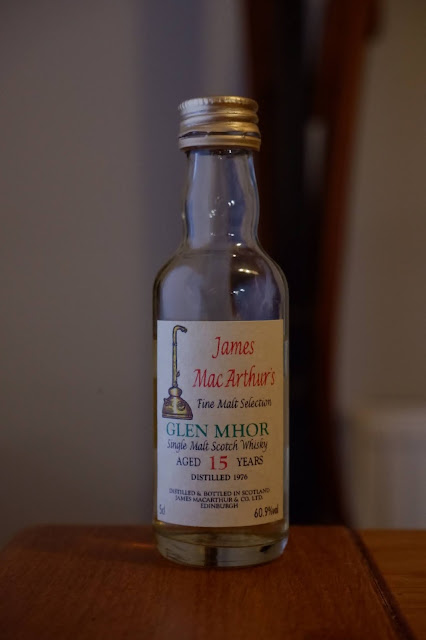 We can have a website about all things Glen Mhor, but this must include the whiskies themselves. So, as promised, expect more thoughts and reviews as we undertake the aim to build the most definitive collection of Glen Mhor reviews.

Of course, every review is tinged with sadness. Every cap twisted, every seal broken, means one less Glen Mhor in the universe. That's a sad thought, yet this is whisky, and it was meant to be opened, experienced and (hopefully) enjoyed. The work and effort of everyone we've documented in our research demands that the distillery legacy is celebrated by the mere act of enjoying their efforts.

I cannot think of a better few hours than sitting down with a sample of Glen Mhor and seeing where it takes us. An evening to remember and an event that I'll be aiming to do on a regular basis.

We're kicking off with this miniature bottling from James MacArthur, which was released in April 1993. It's part of MBC Set 5, which is likely to mean Miniature Bottle Club; the UK branch. A total of 3 whiskies were included in the set and 180 sets were issued. This raises the question if you do the maths of 5cl x 180, that's quite a short outturn from a cask.

This is the only bottling from James MacArthur when it comes to Glen Mhor. So, that removes a theory that the remainder of the cask was bottled in a 70cl release. Perhaps this small parcel of whisky was acquired? Or they were terribly unlucky with a leaky cask? Do the maths, and this left the cask in 1991, or at the very latest 1992. So, in theory, a natural container comes into play, or more likely, which might suggest the cask lost most of its contents.

Distilled in 1975, this is shortly after DCL took over the distillery and will feature the Saladin boxes in effect. Whenever you're faced with an old whisky, it is fun and educational to look at that time period, which you can do via our Distillery Info and Timeline pages.

We've already reviewed a 1975 bottling from Cadenhead's and that had more cask interaction in terms of colour and exactly the same strength - small world. 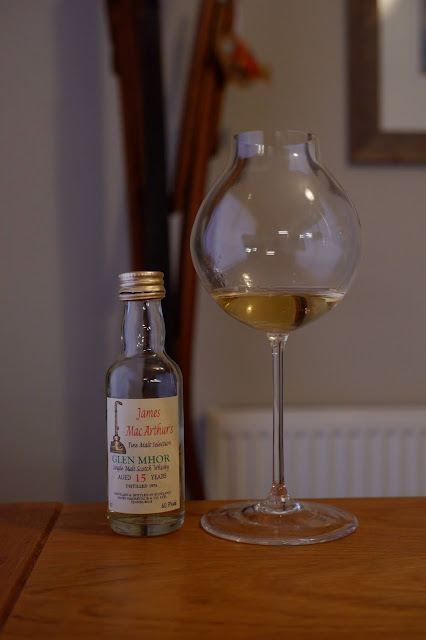 Distilled: 1975
Bottled: April 1993, 15 years of age.
Strength: 60.9%
Colour: a very faint haze.
On the nose: initially, very pungent alcohol. Limescale, chalk, white pears and wallpaper paste. A very creamy cream soda, gooseberries and a glass of Portuguese Green wine, raw cake mixture. This needs to sit for a while...
Better. Vanilla essence, coconut flakes, oats and a rugged spirit beneath it all with some tropical fruits trying to fight through the flooring.
Adding water tones it down a little, but it's still prickly in places. A touch more fruity, less weird I suppose, apples and orange oil.
In the mouth: spirit-driven, rugged and with dusty oats. More raw cereals, a puff of flour, hint of soap that never fully develops. A modern lemonade, green bananas, newly laid concrete, bashed mint leaf, Granny Smith apples, vanilla caramel, white chocolate and an effervescent quality. Adding water reveals more dustiness and a much fuller body.
My thoughts
A tenacious malt, Highland in full regalia; difficult and yet rewarding. A style not seen today.
As you'll discover here, 1970s Glen Mhor is hugely variable. Full of bizarre aromas and flavours, twists and turns. A period when DCL maxed out production. I've yet to unearth the details, but I believe they did make internal changes (not to the production equipment) but in terms of fermentation, perhaps yeast and spirit cuts. Some might have been successful, other attempts, not so much. In other words, shortcuts aimed to boost production and minimise costs.
This might explain the variations, along with some casks that have seen better days. After all, DCL only wanted Glen Mhor (and Glen Albyn) for their Highland malt status and shortfall in blending stock. Hopefully, one day, I can put more flesh on the weak bones of theory.
I enjoyed this Glen Mhor, but it really did need time. I'm glad when I originally opened it, I put the bottle aside for a few weeks. Even in the glass, giving it time to settle. There's very little cask influence here, so it gives us a sense of the distillate. A whisky that does feature some of the good and bad elements of Glen Mhor during this time. As such, a very enjoyable evening and memorable malt.
Score: 7/10
Labels: Glen Mhor James MacArthur's Whisky