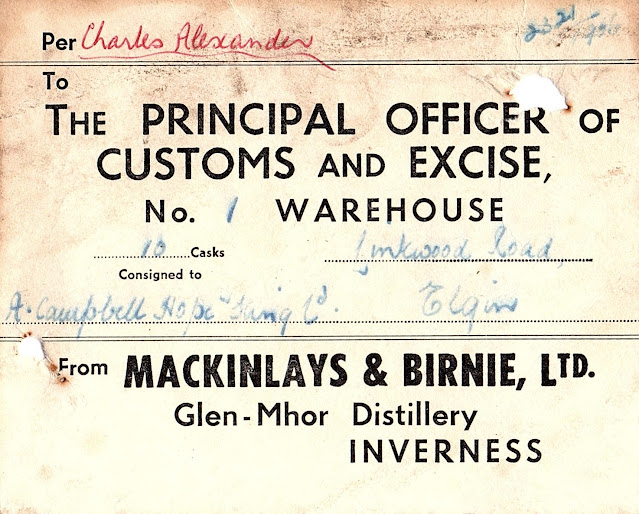 Here's a fantastic find, a cask label from 1956. Nowadays, whisky casks are fairly sedimentary things, often filled in central locations far away from the distillery and never seen again until they are emptied.

Glen Mhor's main business outside of its own single malt and blending needs of the Mackinlay's, was filling orders. We've seen from our Railway invoices that these casks were shipped across the country. On the casks would have been labels such as this, confirming that #2321 was destined for Campbell's for Elgin on Linkwood Road along with 9 others.

Following research, this is Campbell, Hope & King that were acquired by Whitbread in 1970 and have been lost to time. Whereas Elgin's other independent bottler, Gordon & MacPhail, has gone from strength to strength. Prior to being acquired, Campbell's had an outlet in Elgin that was well-known for bottling single malts from a variety of distilleries including Macallan. Also, in Elgin, was a bottling and blending operation. So we can deduce that Glen Mhor was supplying this bottler for their blend that was short-lived and only endured for a couple of decades. Bottled as Campbell's of Elgin, this was originally a liqueur whisky, before becoming a blended scotch in the 1960s.

Also known as Archibald, Campbell, Hope and King, this explains the 'A' on the label as there was only so much room to fit everything onto the line. Glen Mhor is proudly stated on the label, these aren't Glen Albyn casks, which were also owned by Mackinlay & Birnie.

My thanks to Alan for this great find and to Rose for preparing the image.