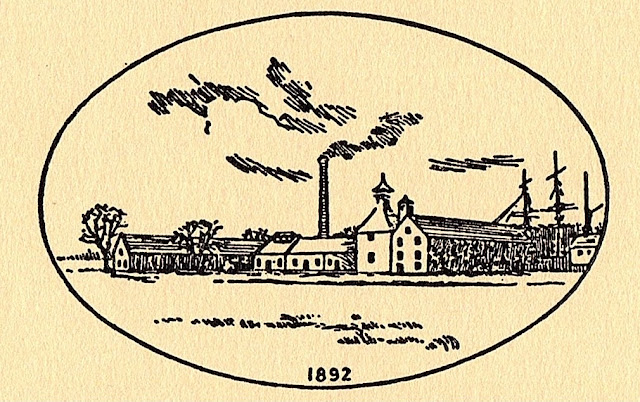 What's that saying, again? The devil is in the detail?

Most of us will be familiar with the official bottlings of Glen Mhor that displayed the above image when they debuted after the Second World War. The above was in use until the 1970s when the Jura-shaped bottle adopted a more rural drawing that hinted at the Highland landscape of the region.

However, as much as we are familiar with the drawing, how many of us have actually stopped to look closely at it? My thanks firstly to Alan for the image and to Rose for prepping it for this article.

The setting is rural, which was certainly how Muirtown was in our 1884 image and the early images available in our Photograph section, until the late-1920s. There's the tall-masted ship at the rear, symbolising the Caledonian Canal and access. The height is a little embellished, but the feature is there to make its mark. And it confirms that our view is from the 'more attractive' end of the distillery. One that was never really photographed as on the left would have been the Caledonian football ground and in front, the busy Telford Road with various buildings in the way.

So, there's a certain romanticism and artist license present. Yet if you were to cut away these surrounding obstacles, there would be workers cottages and the offices of Mackinlay & Birnie at the front (beside the access road) and the maltings and production buildings would be on the right-hand side.

What is wrongly placed, is the canal, which in reality would run alongside the production buildings and the original, and largest, warehouse. This is conveniently on the left, but in reality, sits at the back of the site; where the boat is in the drawing. So, again, some artistic imagination. The additional warehouses that would slowly appear on the left (backing onto the football ground), would start to appear towards the end of the 1800s. These would run out from the distillery as opposed to running alongside the boundary.

The other consideration is the date displayed. 1892 isn't something that we've touched upon greatly yet. The distillery came into being in 1894, but the work would have been laid out for some time prior. This will all come to light as we explore the Dean Guild and Valuation Rolls that once belonged to the Inverness Council - these still exist and are held in the Highland archive.

There is also still the mysterious 1886 date that appears in our Timeline. This is when the Dean Guild approved the site for a new distillery called Glen Mhor. The fact that it took nearly a decade to come into being is a mystery at this stage, or even who proposed the idea. These are mysteries that we will uncover in the coming years.