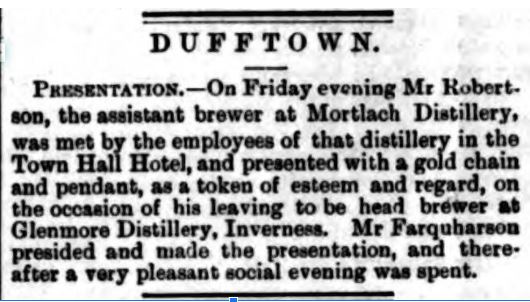 The Elgin Courant, which must have been the go-to local rag for all the whisky happenings of the period, reports the departure of Mr Robertson from the Mortlach Distillery on 18th December 1894.

Counting backwards, this meant that Robert departed the illustrious confines of Mortlach on the 14th December and would have started his role with Glenmore (a typical spelling mistake of the period), potentially, the following week.

Robertson is one individual who has been largely overlooked by time. He served as Distillery Manager for 43 years and his departure was only heralded by mother nature, as he passed away on-site at Glen Albyn house in 1937.

You can read a little more about him in our Distillery Timeline and Newspaper sections. However, he is one individual that I am keen to research more. Why him and Glen Mhor? Well, John Birnie as we know, was a formidable brewer himself, having helped revive Glen Albyn. But in becoming co-owner, his duties might not have allowed him to be on the distillery floor as much as he'd have liked.

What's clear from my research since is that John never forgot his distilling skills and despite a range of titles, public service duties and honours. He always seemed proud to be referred to as Scotland's oldest distiller etc. His links to Mr Robertson perhaps go back to his own apprentice days at Benrinnes distillery on Speyside. If they did not work alongside one another, they would have been active at nearby distilleries in a tight community. The Birnie's are the overlooked family of Speyside distilling, when others talk about the Grants etc.

Thinking beyond, John was the technical side of the partnership that formed Glen Mhor. He would have called upon his own experiences at Glen Albyn and Benrinnes to help shape the internals of Glen Mhor. He may have visited other distilleries for insight or reached out to industry friends and the Mortlach distillery in Dufftown was highly regarded. Bringing in Robertson with a promotion, only shortly after firing up Glen Mhor is an interesting but logical move. You would have thought that the future head distiller was in situ from the off, but this wasn't to be.

Role titles can be meaningless things at times and convoluted. From Head Brewer to Distillery Manager, such a transition did take place. Duties such as giving tours to the press, seem to have been taken up by John Birnie as shown in the 1898 newspaper article. Robert Robertson arguably had more of a practical role that took advantage of his experience. After all, if you can work the internal maze of Mortlach's bizarre distilling regime, then you're set up to work almost anywhere else. Remember, this is the man who potentially distilled the Shackleton whiskies.

As Robert's life is very much wrapped around the fabric of Glen Mhor, we'll look to bring you more in his career.