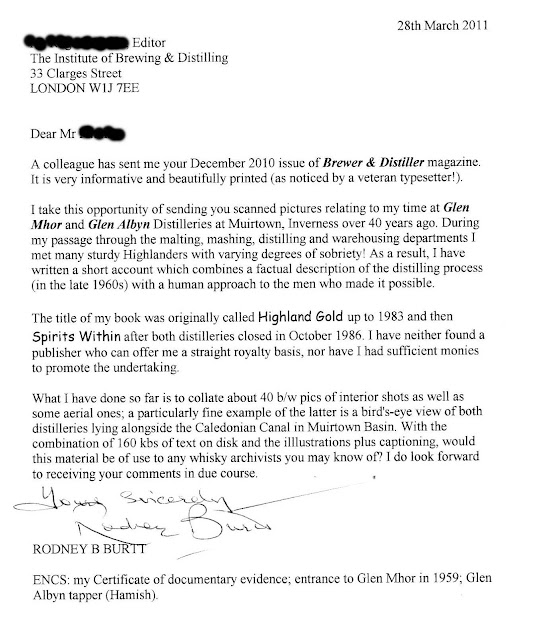 Thanks to Alan once again for this incredible find.

Regular readers will know of Rodney Burtt, thanks to the rich source of material he’s provided as his legacy via various photographs and to Gavin D. Smith’s Stillhouse Stories Tunroom Tales book* – the nearest we have to an account of working at Glen Mhor distillery. He's certainly one person I'd have loved to have sat down with and spoken with.

Gavin's book was published in 2013 and is still a piece of work that we've yet to fully delve into - all in good time. What's interesting is that prior to the discovery of this letter, I believed that Rodney was an enthusiastic ex-employee, who in subsequent years, kept tabs on his previous place of employment. Along the way, compiling various photographs and memories; some of which saw the light of day in Gavin's excellent book.

It now seems that these were more than just fond memories. Rodney had been trying for a few years prior, to have his own book published on his time at Glen Mhor and Glen Albyn. This puts some of the captions we've found into context alongside the photographs and why his collection of images also featured other distilleries outside of Inverness. Rodney, was explaining the process and daily life of a distillery.

Originally entitled Highland Gold, this was changed to Spirits Within, following the closure of both distilleries in 1986. This suggests that the manuscript had been in existence for some time given this letter heralds from 2011. I'd love to get my hands on the disk that's mentioned in this letter. We may not be able to publish Rodney's book, but the content would have been invaluable.

It's yet another tantalising nugget in the journey into Glen Mhor. We're very much down the rabbit hole and I've no idea what lies ahead. However, the fun is in the discovery and the consideration of such things. To give you an indication of just how thorough this project is, the letter provided the sender address, which oddly enough, is currently up for sale. So, I've emailed the Estate Agent in the hope that relatives of Rodney are involved in the sale and that (if they are willing), can provide more insight into his materials, memories and maybe even, a floppy disc - it is worth a shot!

In the meantime, we've added some of the letter text to our Quote section.

*Note the Amazon link is a commission-based link - to help fund our Glen Mhor research.