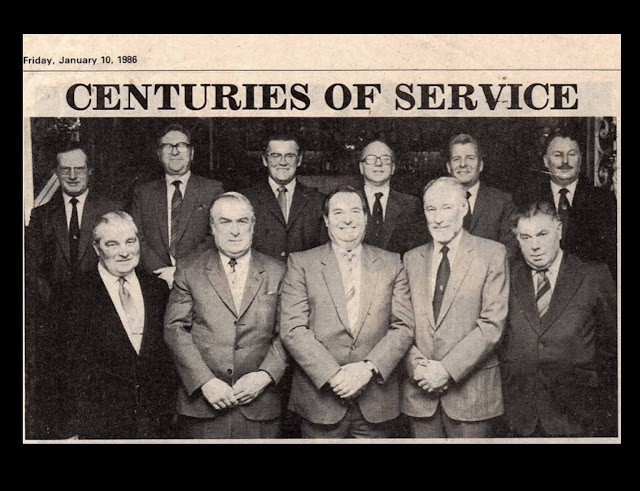 My thanks to Alan for unearthing this wonderful newspaper article from Northern Scot in 1986. Also, congratulations to Glen Mhor's head warehouse operator, Mr D.J. MacDonald, on his award for such long service.

I'm sure this award was received with mixed emotions in January by many in the photograph. So many colleagues had been laid off during the cutbacks of 1983, careers ended and new journeys commenced. I know I'd have mixed thoughts on such an honour, knowing that possible friends had been cut short. Potentially, this is one of the last awards given by DCL for service to a member of the Glen Mhor team.

This reminds me of a recent conversation I had in the back of the car on the way to a whisky tasting. My backseat companion had recently been laid off by a distillery, only about 4 weeks short of his 40th year of service. There was no award, send off or even a bottle to say thanks. The disappointment was palpable and I shared in that feeling, as such long services are becoming a rarity nowadays. This is underlined in the newspaper article from November 1980, which celebrates the retirement of 3 Glen Mhor employees with 76 years of service between them.

Glen Mhor was already dismantled by the time of this newspaper article and 1986 is the year when it was demolished. Many of the team were made redundant in '83, but some clearly, were redeployed elsewhere. It is interesting that D.J. is still listed as attached to Glen Mhor - perhaps that's a reflection of his locum status? Possibly an indication of his pride in Glen Mhor? Or maybe, the warehouse team were kept on-site for longer than the production employees, to maintain the maturing casks until they were all removed? 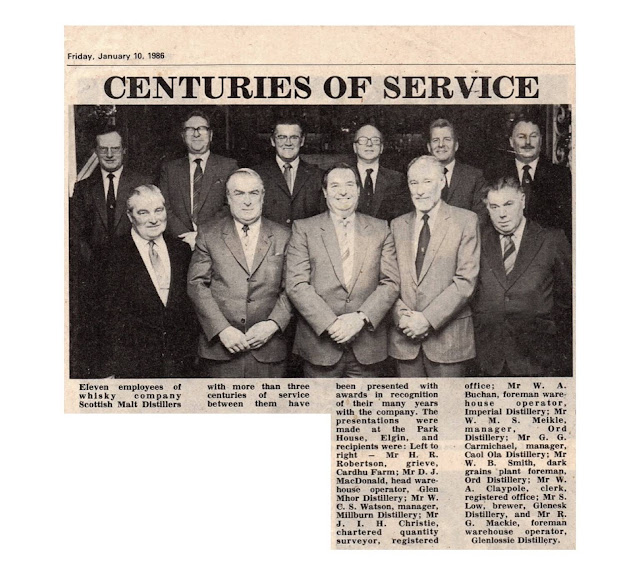 Perhaps there is a clue in the company that's he's keeping in this photograph. Standing beside him is Mr W.C.S. Watson, manager of the Millburn distillery, also located in Inverness that survived until 1985 and still stands today, albeit as a hotel/restaurant. It seems possible that D.J. could have worked at Millburn following the closure of Glen Mhor. Although referring to our detailed Distillery Info page, under warehousing, confirms:

Prior to demolition, 40,000 casks were present before being transferred to nearby distilleries.

As always, we'll add this to our newspaper section and if you have any new information to offer, please get in touch. Thanks to Rose for her great work on these images.