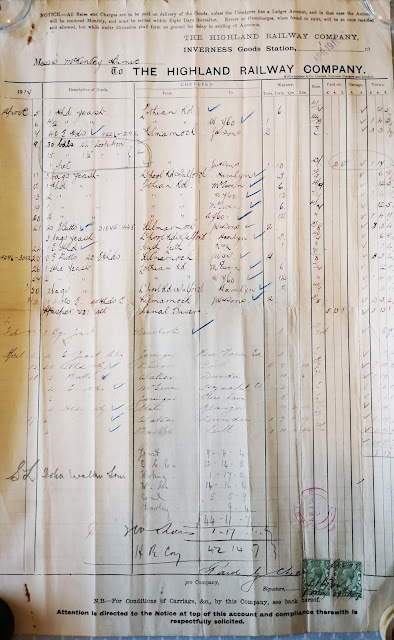 This is our fourth and penultimate look at railway shipments involving Glen Mhor from 1917. You can check out the invoices so far via the hashtag as we build a picture of the movement of goods and patterns during this turbulent period. My thanks once again to Distillery View for these documents and his help throughout researching Glen Mhor distillery. As much as the hours and resources I put in are beneficial, it's the assistance and support I receive from others that are just as vital in creating this resource for you all to enjoy.

1917 is a significant year for Glen Mhor and its neighbour, Glen Albyn, as later that year they were both turned over to the US Navy to set up their first military base on UK soil. While the bases themselves didn't come fully online until early 1918 and while they weren't in operation for very long, their efforts contributed to the 56,760 US mines that were laid in just 5 months. Partially helped by methods used by the car industry. There is still so much to do on the US Navy section of the site, but all in good time, as I believe it is a fascinating period.

The first impression of this April 1917 invoice, is that it looks busier than previous months. Was the distillery now in full swing with orders, or are we now seeing blenders acquiring stock while they can before the site is put into hibernation?

Shipments of yeast from Edinburgh brewers (McEwans of Lothian Road, Younger & Co. of Rose Street) are still prominent, including further south from Hamlyn in Salford (also separately entered as Manchester) - this particular brewer is still being investigated as its origins were briefly debated in the February 1917 invoice article. Clearly, yeast from several reputable sources was being used for fermentation at Glen Mhor, this would have been John Birnie's decision, having already established himself as a distiller of note at Benrinnes and Glen Albyn. The arrivals of yeast also underline the fact that it was business as usual at Glen Mhor, despite the incoming military occupation. This is also repeated with the arrivals of coal and barley, plus fees being paid for shipments from the canal basin.

In terms of blenders, all the major names are present including Dewars, Watsons, Slater and Baillie's of Leith. The dominant customer of casks of Glen Mhor remains John Walker and Sons, who have four separate shipments during this month - makes you wonder why they didn't just roll 'em into one? In total, 80 hogsheads, 40 butts left Inverness for Kilmarnock during April. That's a lot of whisky, isn't it? Clearly, Walker & Co. was ravenous for Glen Mhor as part of their offerings; highlighting its quality and usefulness.

Compare this to the next biggest customer in Dewars, who only placed 1 request that accounted for 20 hogsheads. The smaller more provincial blenders of Leith, Dundee and Glasgow, offered more sporadic orders, often less than 6 casks to fulfil their needs. This also showcases the outlook of John Walker & Sons, as well as appetite. There's also a single cask order for R&K of South Leith; a single hogshead. This based, on preliminary research¹, is likely to be Rutherford & Kay. Primarily based in Edinburgh's George Street (also branches in Birmingham, Perth and London), most businesses of the time kept their warehouses and blending operations in Leith. Their legacy has been lost to time as K&J went out of business in the 1930s, but they did bottle their own Scotch Liqueur and supplied whisky to the House of Commons.

What also strikes me about this invoice aren't just the details above. I'm struck by the human element, the workings, the blue ticks, as an accountant or member of the Glen Mhor office team ticked off the details. The blue retains a vivid nature, bringing a splash of colour only joined by the pink date stamp and green Royal Mail stamps at the bottom. To think this was tallied off nearly 105 years ago.

¹ thanks to Justine as well for her input.