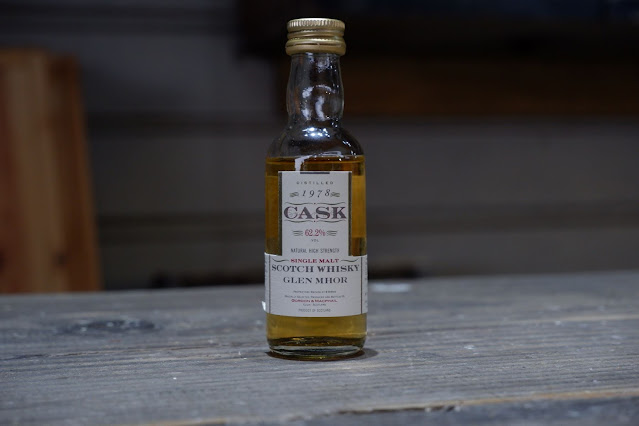 It's about time we did some Gordon & MacPhail.

Even to this day, the Elgin powerhouse is still bottling Glen Mhor. Times may have changed in terms of presentation and pricing, but thanks to this family dynasty, Glen Mhor casks from the 1960s onwards, have been bottled as single malts.

If you see a Glen Mhor at retail today, or at auction, there's a high probability that it will be a Gordon & MacPhail release. Their stamp work with the Glen Mhor name is hugely prominent and significant, it's likely your first sip of its whisky came from a G&M release.

The 8 year old edition arguably is seen as the natural successor to the official single malt Glen Mhor's (6 and 10 year olds) that came to an end in December 1973. G&M launched their 8 expression in 1976 and it was widely supported and distributed. that void in the north of Scotland where the Glen Mhor was a recognised name and keenly purchased.

The range grew into 12 and 15 year old expressions that can be variable and suffer due to their bottling strength in some batches. A variety of specific vintages were also released with those from the 1960s and we'll cover all of these in our whisky section, as and when.

I was fortunate to spend a day with the G&M team pre-pandemic and was kindly poured a dram from a cask of Glen Mhor that had yet to be bottled, and as you can see, there's plenty life left in the strength, meaning that we'll have more Glen Mhor to look forward to seeing - as I doubt I'll be able to afford a dram! 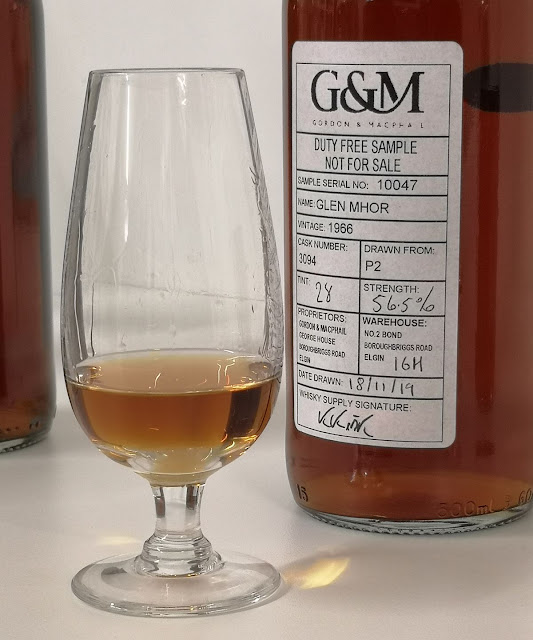 For all the casks that G&M have possessed of Glen Mhor, a small segment have been deemed good enough to be bottled at cask strength. These tend to be from the late 1970s in terms of vintage. I have a couple of these that we'll be picking off as part of this project. Needless to say, cask strength Mhor is where it is at. The distillery character does come through and you're very much in control with adding water if things prove a little too Mhor-like for your palate.

On the nose: immediately this is robust and forceful and tinted with the rare aroma of stone fruit. Smoked lemons, New York Vanilla Cheesecake and more fruits appear with time in the glass. Crushed white grapes, a white wine-link aspect, grapefruit and tablet. Plasticine, cotton sheets and a pleasing floral aspect break up any of that classic Glen Mhor harshness. Oily, wood sap, linseed oil, honeysuckle and lemon meringue pie. I’m also perplexed for a few moments by another note that I’ve only really experienced to this degree in a bottling of Glenisla. Yeah, I’m talking about bubble-gum, or more specifically from my childhood, Bazooka Joe. Adding water unlocks softer fruits, toffee crisp and a pan scrubbed with iron wool – it is Glen Mhor after all.

In the mouth: the texture really grips you with its oily and luscious nature. There’s a lingering raw power that continues into the finish of mint leaf. It’s a beast but wonderfully of its time and distillery. Pine needles, grapefruit and flashes of tropical flavours – a rarity for Glen Mhor! Harsh in places, yes. Tonka bean, silver needle tea and chalk dust. The addition of water here calms the vigorous nature and turns proceedings creamy, fruitier, matchsticks and smokiness.

This is a hugely enjoyable and dynamic Glen Mhor featuring a superb nose that you can spend hours in the company with. A fine vatting by the minds at Gordon & MacPhail that ultimately pays dividends.

These cask strength Glen Mhor’s remain some of the best in my opinion and the palate here just falls short of a higher score, but I’m taken and happy to have experienced this flashback to an older style of whisky.