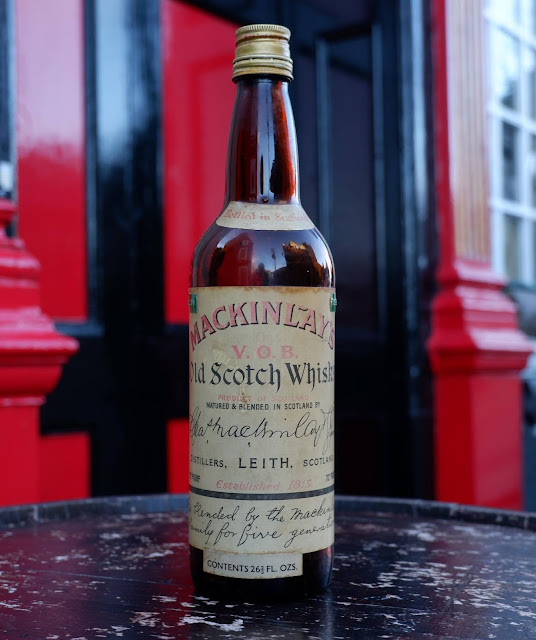 Glen Mhor wouldn't have come into existence without the financial clout and connections offered by the Mackinlay's of Leith. Therefore, we cannot offer the most comprehensive Glen Mhor coverage without looking at this blender in greater detail.

After all, it was their desire to have a source of Highland whisky that lead to the chance meeting with John Birnie, and the rest as they say is history. And what a history we're uncovering in 2021 and beyond.

The Mackinlay's seem proud of their distilling heritage with many labels from their releases underlining that fact as you can see in these photographs. The Mackinlay-side of Glen Mhor story hasn't been told or unearthed as of yet. It's on my to-do list for 2022, but alongside is a return to their blends and those that would have contained Glen Mhor, as well as Glen Alybn.

We're kicking off the blending aspect with a bottling of their VOB, or Very Old Blend. For the record, I've also sourced examples from the 1950s and 1970s, which I'll also review individually, before a full comparison in another article.

This particular bottle was picked up at auction in 2021 and the fill level screamed open me or risk the liquid, so I was happy to oblige. We know that this particular bottle was purchased by its original owner in 1973 (I do love those plastic embossed DIY labels, my dad used to label his cassettes in this way as he taped the Top 40 charts), but I'd actually place this bottle as a 1960s release.

There is a couple of reasons for this. Firstly, just experience and actually holding the bottle itself you know that is an older style of glass; thicker and heavier. In the 1970s this blend received a more modern revamp resulting in a total change. Looking at historical adverts from 1950 and this one from 1954: 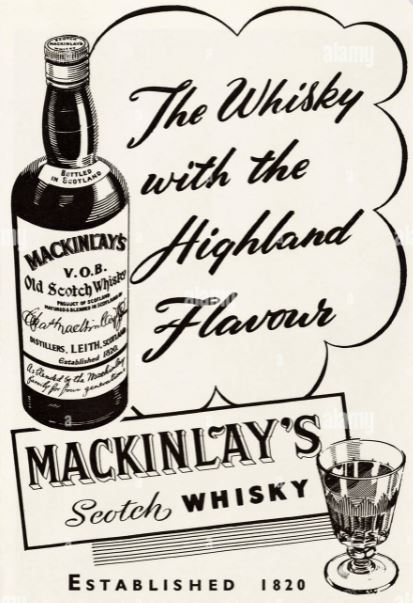 These show the Mackinlay VOB as pictured here with two slight changes. Firstly, these older bottlings show a patent on the screw cap (not evident on this release we're reviewing), known as a securo-cap, which was used by many bottlers into the 1960s, including Macallan and Gordon & MacPhail. The other, arguably more prominent change, is label related which heralds four generations, but our bottling in comparison, changes this to five generations. The devil is in the detail, although there are no set guidelines around a generation of a family in the marketeers handbook, common sense would suggest 15-20 is a safe average; unless tragedy struck sooner.

Opening any bottle with a reduced fill level is a risk, however, it can be quantifiable and also very overdue in some cases. I was confident we were on solid ground with this bottling. The level hadn't reached the critical point in my view, where things can smell great and the palate is completely wrecked like a Jura 10 on the rocks.

I would give you my own version of the Mackinlay history, but as is always is the case, Philip Morrice (author of the definitive The Schweppes Guide to Scotch) has done a marvellous job already, so here's his detailed summary:

'The original Charles Mackinlay started business as a wine merchant in the port of Leith in 1815 and a tradition grew up whereby the business passed from father to son and so it continued as a family company through five generations until 1961 when it became part of the Waverley Group Ltd., the wine and spirits subsidiary of Scottish & Newcastle Breweries Ltd. Charles Mackinlay & Co. Ltd was acquired by Invergordon Distillers in 1985 which, in turn, became part of Whyte and Mackay, who continue to promote the brand.

The Mackinlay involvement in whisky started off on an agency basis until they decided to produce their own proprietary brands, beginning with Mackinlay’s Vatted Old Ben Vorlich. They went on to become suppliers of whisky to the Houses of Parliament and enjoyed a particularly unique contribution to whisky history by supplying 25 cases of Mackinlay’s Rare Old Highland Malt from the Glen Mhor distillery, which they part-owned at the time, to the ill-fated Shackleton expedition to Antarctica.

Well before then, however, The Original Mackinlay had been established as the company’s flagship product to be followed later on by Mackinlay’s Legacy and Mackinlay's VOB.

In 2007, 11 bottles of Mackinlay’s Rare Old Highland Malt were found in the ice at Shackleton’s Antarctic base camp. The liquid was recreated for two limited edition releases –The Discovery and The Journey – both of which contain malt whisky from Glen Mhor and other distilleries.'

There's a clue in the quote above, did you spot it? Yes, this was the 5th and final generation of the Mackinlay dynasty. Ending in 1961, so that gives us a date and potentially labels and designs were used for a while after this, before being refreshed. On this particular bottle, there is no mention of Waverley's or Scottish & Newcastle, giving more prominence to my belief that this is a 1960s release - you argue that it could come from the late 1950s, but I prefer a safe approach until more facts are revealed.

From our own unearthed 1898 Glen Mhor Supplement - page 4 to be precise - we have this historical outline of the Mackinlay's:

'Messrs. Charles Mackinlay & Co., as is generally known, are joint partners and proprietors of Glen Mhor Distillery, and act as agents for the sale of Glen Mhor whisky. As will be indicated from the picture of the facade of their offices and also representing their bonded warehouses and export stores, the business done by this enterprising firm is a very large one. They became distillers in 1894 in order to supply the demand for a rapidly-increasing trade for a pure Highland Malt whisky for export. With this end in view they joined Mr Birnie in leasing the ground at Muirtown on which Glen Mhor Distillery was erected. The firm do a large business in England, Ireland and Scotland, also America and the Colonies, where Mackinlay's whisky during the past 15 years become very popular.'

Enough of these facts and historical ramblings! I appreciate your patience and hopefully support, so let's delve into the liquid. Before we do (sorry), I just wanted to highlight after an initial tasting that confirmed the whisky was good. The contents were decanted into various bottles, as I believe in letting things come together after being opened after 6 decades in glass. A couple of weeks later, I returned to review the whisky. 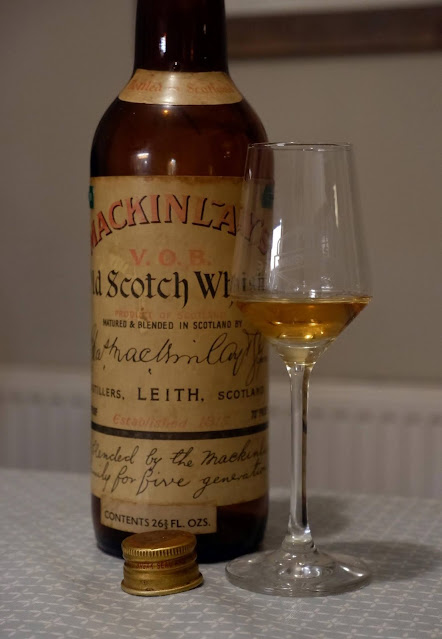 Strength: 70 proof (old UK standard, divide by 1.75 to convert to ABV)
Colour: a rich, decadent caramel.
On the nose: a light arrival initially, traces of engine oil and an old room that's been locked up for years. Orange, camphor and wet concrete - that's the Glen Mhor signature. Cracked walnuts, bashed old brass and green peppercorns. A faded rustiness, sage, worn grease, honeycomb and mocha.
In the mouth: well poised, an initial suggestion of soap that soon fades as the peat steps in and endures into a long finish. Spent smoke and old ashes, charred beef with a pleasant oiliness. The fruit in here has lost its vibrancy and sparkle, being swamped by more dominant flavours. Black peppercorns and a rusted old bar joins in on the finish.
My thoughts
Very evidently an old-style blend with a high malt ratio and those subtle smoky and sooty flavours that you associate with a more manual and direct-fired era. Much to enjoy, much to appreciate and you can pick up the Glen Mhor aspects. Glen Albyn is likely more of the softer faded fruits and with 2 distilleries under its belt, would Mackinlay's look to outside their portfolio for other distilleries in blend? We'll probably never know, but with the exception of some grain whisky, this is very much an Inverness-based blend.
Score: 8/10
Labels: Mackinlay & Birnie Whisky