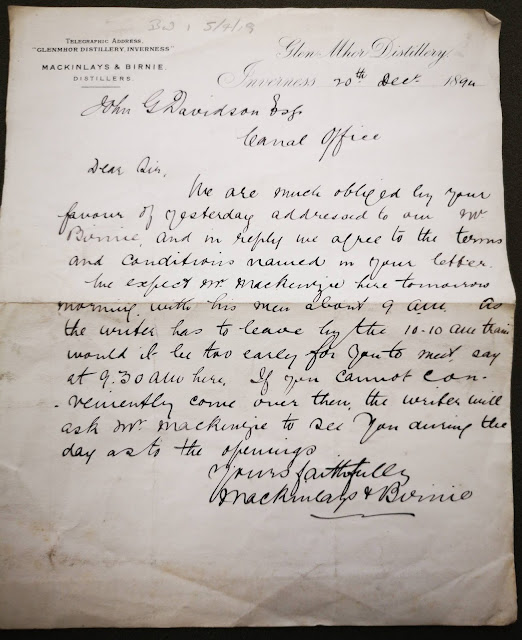 This week have an unexpected find amongst some old Caledonian Canal materials, which were all linked to the operation of the locks that were on the fringes of Glen Mhor. As a long shot I requested access to whatever correspondence existed for the nearby locks and keeper's cottage.

My initial hope was that the canal records would provide more insight into shipments to and from Glen Mhor along the lines that we've seen with the railway invoices. In reality, it was a huge pile of mundane requests relating to access from all manner of individuals and companies; mostly looking to travel north through the locks and into the Muirtown Basin and beyond.

Still, you don't know what a pile of documents contains until you start digging. There were complaints about charges, debates about access and all manner of queries. While it is easy to be disheartened by a lack of documentation specifically relating to Glen Mhor, this leads me to believe that the locks were the endpoint of the remit of the canal officials. And that the basin itself and docks - if there is a similar cache of records - may hold more Glen Mhor information and that relating to Glen Albyn. So, the focus will switch as this door closes.

Also, worth considering is the search shows there wasn't much traffic (if any) relating to Glen Mhor goods that went through the Caledonian Canal, as these records were comprehensive and covered a large period. The waterway was an important access point for the distillery, but not immediately south, based on these letters. This leaves the conclusion that goods came and went via the Muirtown basin and down the East coast of Scotland to Edinburgh, and Leith, which is where the Mackinlay's blending operation was based.

My afternoon wasn't a complete washout as this letter from 20th December 1894 is addressed to John Davidson of the canal office. This a hugely symbolic month as officially, Glen Mhor started production on 8th December. Of course, we know now that the distillery was running spirit during September and advertising draff for sale in the local press.

So, it's a getting to know you visit perhaps and establishing some rules and access for the canal entry point, which would be a useful transportation tool for the distillery. Also, it's worth highlighting that the official Glen Mhor head letter paper was in use already. I've transcribed the letter to the best of my ability:

'We are much obliged by your favour of yesterday addressed to our J.W. Birnie and in reply we agree to the terms and conditions named in your letter. We expect Mr Mackinlay¹ here tomorrow morning with his men about 9am. As the writer? has to leave by the 10-10 am train would it be too early for you to meet, say at 9.30 here. If you cannot come conveniently over then, the writer will ask Mr Mackinlay to see you during the day as to the openings.'

The letter does suggest that the Mackinlay's were investigating access via the canal and opening the locks. Everything was being considered during what must have been a hectic time with a new distillery coming online. Our aforementioned train invoices show that by the 1900s, much (if not all) of Glen Mhor's filling orders, were transported by train. Interestingly, the Mackinlay shipments are noticeable by their omission. Suggesting, these were either done on separate shipments, or that the docks at the Muirtown Basin offered a more accessible way to deliver to Leith.

¹ This is likely to be James Mackinlay who took the lead in the project. Charles was also involved and introduced James to John Birnie, but given the importance of the project and scale for the Mackinlay family, the head of the company would be in attendance.