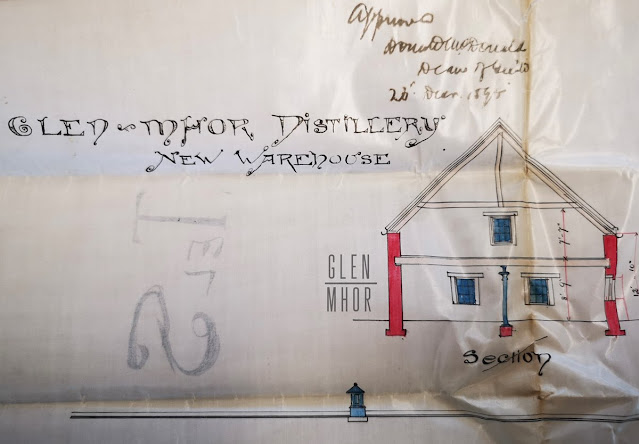 We're moving into November 1895, just over a year since Glen Mhor started production. It seems somewhat bizarre that work was already being considered to expand the site. Today's discovery is remarkable and confirms that it did actually happen.

This new find was not even on our in-depth timeline until now. As the timeline continues to evolve with new discoveries, so does our understanding of Glen Mhor.

This specific extension relates to the original warehouse at the back end of the distillery. Through our previous research we knew that the additional warehouses (that backed onto the football ground) started to appear in 1898. We have those plans to consider in a future article. However, I was always under the impression that the original warehouse ran the length of the site and was completed in 1894 alongside the distillery buildings. It makes sense doesn't it?

You can see in this photograph from 1898, how it dominated the southern end of the site. There was no suggestion, until now, that this original warehouse was smaller in size: 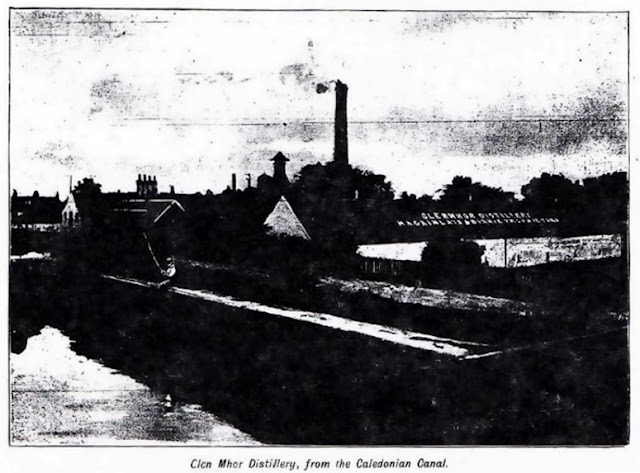 You can clearly see it in the above image, with its whitewashed walls and distillery writing on the warehouse roof. And a distinctive line midway... could that be? What we do know from the accompanying distillery tour in 1898, is that this warehouse was 315 feet in length, capable of holding 150,000 gallons of whisky.
Now, we can reveal the original warehouse was indeed much smaller. This brings into context the later issue of the floor malting limitations that we discovered in the Saladin Boxes document from the late 1940s. It's fact that Glen Mhor was expanded greatly over its lifespan, by the time of the 1940s it had a 3rd still, more production capacity and an array of warehousing. All waiting for casks that were held up by the bottleneck of the malting floor.
It also gives us the initial vision that Glen Mhor was a more modest affair when it was planned in 1893. The malting floor and single warehouse would be ideally suited in terms of capacity. Yet just a year later, attention turned to the single warehouse and its expansion.
We do know that the Mackinlay's had a large appetite for Highland whisky (this would also prompt DCL to buy the distillery in the 1970s), perhaps the initial plan was to ship more casks to Leith for its blending operation and Edinburgh warehousing? The background to these decisions should become clearer (or, I hope they will), as I start to investigate the Mackinlay aspect in greater detail.
Speaking with Justine of Kaskwhisky, she confirmed that the Mackinlay's did own a warehouse near their headquarters on Queen Charlotte Street (known as Charlotte Street) in Leith. However, this was only established in 1905 and suggestions are it was used mainly for bottling. They did have another warehouse in the East Dock, acquired in the 1870s. Perhaps this tells us that the Mackinlay's didn't want to put all their eggs in one basket. The business was successful and growing, they needed to expand, but couldn't achieve this on 2 sites simultaneously.
These Glen Mhor warehouse plans were submitted in November 1895, via a firm (currently unknown) at the Queen's Gate Chambers in Inverness, which still stands as a category B listed building. This was home to Alexander & Ross, but not till the turn of the century, if records are correct. This firm would go onto work on Glenmhor distillery in 1917 and subsequent work on Dalmore and Glen Albyn. There is also an informative article about Alexander Ross, highlighting his work in the region.
The expansion is a surprise, funnily enough on this overview, referred as old warehouse even though it is a year old! The new warehouse completes the extension and sizeable warehousing that would now run the length of the site. Size wise, the extension measures 35x113 feet. Meaning the original warehouse from 1894-1895 was 200ft in length.
The landowner on the adjacent land is named as Sir K (Kenneth) Matheson who we've covered in an earlier piece while discussing the original site. He also owned the Glen Mhor plot and much of the surrounding area. 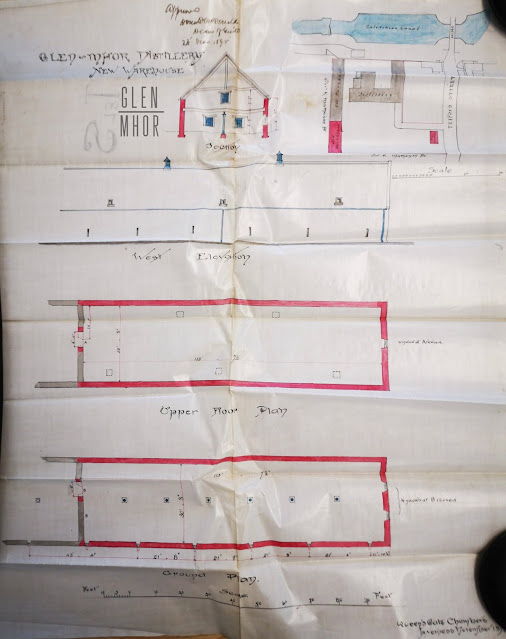 There is another surprise on this overhead map, with the inclusion of yet another warehouse - albeit very small - on the other end of the site, near the Telford Street end. This is an oddity, why on earth would you have a such a small warehouse far removed from the distillery? This new building would have been approximately 50x25 feet.
What we do know is that this area for the site would in later years became the home to various buildings. Photographs from the 1970s confirm the main offices are in the vicinity, there is also the suggestion of workers houses and a sample room. Further research should provide more clues and if this smaller warehouse was indeed built, or converted for another purpose. It underlines business was good, even just after launch.
I reached out to Alan for his thoughts on this smaller warehouse:
'Customers may have been asking for the company to provide storage this would be lucrative or give the Distiller a rent, this is first mentioned at Falkirk/Rosebank. On the small warehouse I am unsure, if it was a Duty Free Warehouse, it maybe used for racking casks ie into the then minimum they could sell to a customer which was a 9 gallon cask, on removal Duty would have to be paid to on site HMCE, though this is based on my experiences, it may have been have been an other reason.'
A bonus discovery, is the original entrance road layout, which would soon become a straight road into the heart of Glen Mhor. In these early days, it curled into the site, arriving at the malting floor.
This single plan has given us insight into more than expected. It also marks the first evolution of the Glen Mhor distillery, increasing warehousing capacity significantly. Remember, at this time, Mackinlay & Birnie did not own the nearby Glen Albyn, so they were very much on their own. Next up, more warehouses.
My thanks to Rose for the image work and enhancements.
Labels: Distillery plans Glen Mhor warehouse