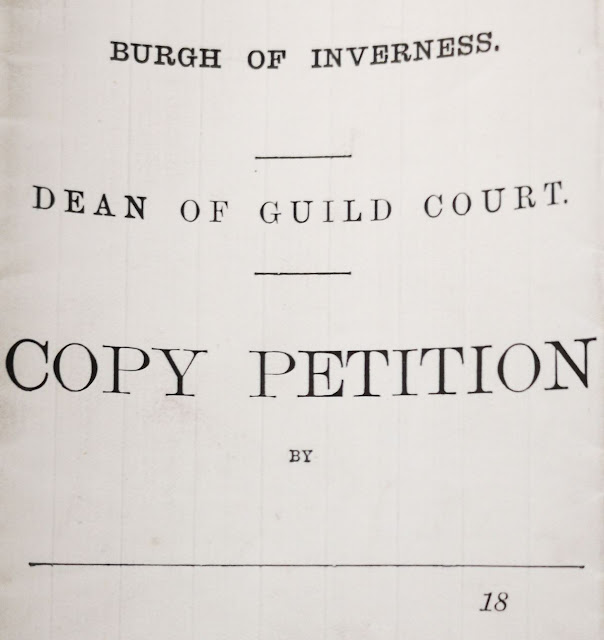 This represents an exciting discovery, made during my archives visit, and is the existence of a Guild Court Petition regarding the approval to use land to the east of the original distillery site. This allowed the much needed expansion of Glen Mhor, allowing a sizeable increase with the building of several new warehouses that would back onto the football ground.

The petition itself confirms a disagreement between Mackinlay & Birnie and Sir K.J. Matheson; the landowner. We've discussed this laird previously when documenting the original 1893 distillery plans. A very wealthy individual, Sir Matheson owned huge areas of Scotland and particularly around Inverness. It would suggest that there was no formal agreement in place (other than a gentleman's agreement) when the distillery was initially established in 1893. No suggestion, that if Glen Mhor was successful, it would be able to expand with new buildings beyond the vision of the original plans. Also, appearing against the building of these warehouses, were the owners of the Caledonian Canal. Both parties against would have their representatives present for the hearing. 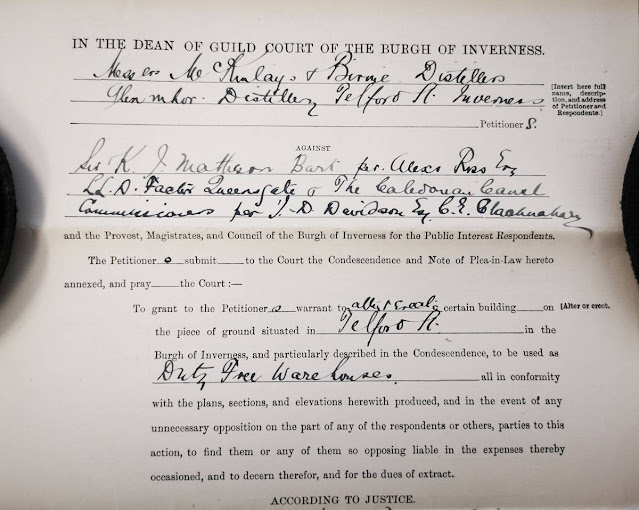 As we've shown previously, the newly discovered first warehouse production in 1894, was built on the 1893 site agreement boundaries. Its establishment, created a man made barrier along the southern end of the site. This seems to be been a temporary expansion, not enough to satisfy long term ambitions and the growing demand for Glen Mhor whisky. The owners had to seek a more permanent solution, in doing so they seem to have prompted the wrath of Sir Matheson who sold Mackinlay & Birnie the original site and the Caledonian Canal operators.

This deal was presented on 20th October 1898, just 4 years or after Glen Mhor began production. A representative appeared by warrant to the court, 4 days later at noon to discuss the proposal before the court. The plan being presented was for a Duty Free Warehouse with a cost of £573. In today's money, this represents roughly £80k. A good deal for warehouses that would last almost century, and would have lasted much longer, if it wasn't for the cuts of 1983 across the industry. 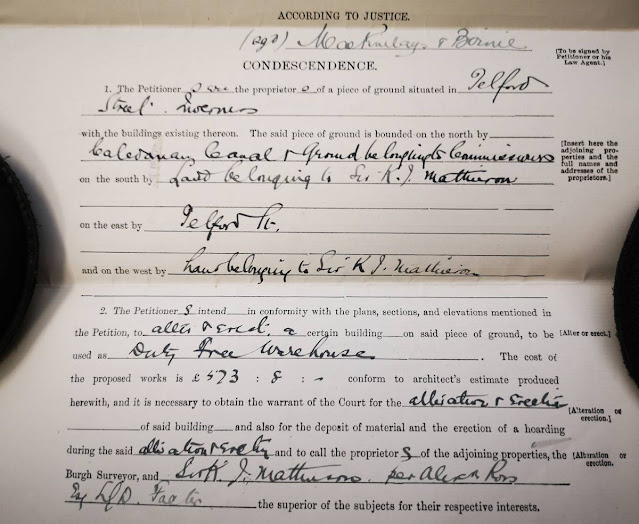 Why did the proposal prompt a challenge from 2 neighbouring parties? Good question, we can only speculate. Firstly, the Caledonian Canal may have been for practical reasons. After all, the warehousing would not adjoin their land. Perhaps it is possible that they feared the canal quayside becoming busier? As my recent research has shown via the canal records, there was next to no distillery traffic recorded coming through the canal in either direction. Meaning there was little benefit financially to the canal operation from having an expansion of the distillery. More boats coming via the Muirtown basin, potentially causing an obstruction to canal traffic? It seems a logical conclusion. This segment of the canal had several locks to the south, a swing bridge to the north and in-between the likelihood of increased shipping to Glen Mhor. The reality of the situation may have been entirely different, as yes, long term there might have been more shipping of materials and casks, however being able to mature the casks on site with increased capacity would have limited shipping traffic for casks.

But what of Sir Kenneth? A man and family that arguably were used to getting their own way in such matters? Possibly they were being difficult, although their disapproval again had more practical means. They retained ownership of the land to the east of the distillery; the land that would be impacted the most by any building along that eastern boundary. As far as I know, this land was rural, it would sometime in the 1890s, become known as Caledonia Park and play host to the local football team. As such, the land and its value might be impacted by a block of stone warehousing that formed a boundary between the park and the canal. A boundary that meant Mackinlay & Birnie were not interested in buying any neighbouring land?

Even just the sight of the warehousing would have been an annoyance, or was this disagreement was a continuation of a prior dispute? We might never know, certainly if an answer does exist, then it will be within the Mackinlay & Birnie records that I have yet to examine.

As for the 1898 warehouses that formed the central disagreement of this court meeting, we will be discussing these in greater detail in a future post.