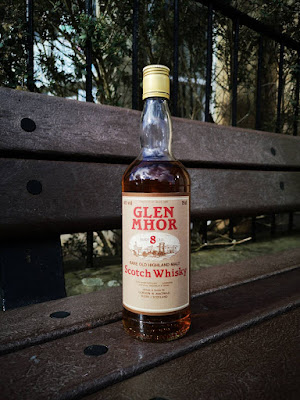 Back with an overdue Glen Mhor whisky review. Apologies for the lack of these reviews recently, as a cold - not COVID! - ruined my senses for a while. But we're over that hurdle and I have quite a few Glen Mhor related whiskies to get through in the coming months.

It seems appropriate that we start with the most commonly sighted Glen Mhor and likely your first taste of the distillery. Yep, it is the Gordon & MacPhail 8 year old bottling.

These came into being in 1976, a couple of years after DCL bought the distillery and promptly announced that the official single malts were ending. A real shame, driven by their thirst for Highland blending stock, but at least they left the door open to independents to bottle Glen Mhor. This is why we have so much to appreciate nowadays and underlined how popular it was as a single malt in certain parts of Scotland.

The Glen Mhor we have here is a later edition with a different label. There were various incarnations of this - I really need to reach out to Gordon & MacPhail for more specifics - the original design had a red band and no drawing on it. It is the variant at we have photographed above that is the more commonly seen edition.

There are no specific markings to identify which batch etc. My own experience of these 8 year olds are variable. Highlighted by the miniatures as well. Some are great and others are enough to dissuade you from trying another Glen Mhor.

My thanks to Stuart from Whisky Whims for the sample. A keen reader of my Glen Mhor project, he felt compelled to purchase his first Glen Mhor at auction (£180? before fees) and then open it to share with fellow enthusiasts during the Fife Whisky Festival Weekend. A great gesture and I hope that everyone appreciated the liquid history.

While I will be opening some bottles in 2022 to share with attendees on a proposed Glen Mhor tour, it is appreciated that I receive samples such as this to catalogue bottles and build the definitive Glen Mhor review section, to match everything else that has been put into the site. This is our 15th Glen Mhor review, with plenty more to go!

On the nose: very soft and delicate arrival. Light brown sugar and fudge, probably tablet as well. A bit of a sweetie. There's also a musty aspect, Rich Tea biscuits and well used tea leaves. Some oak, mace and wood spice as well bringing an edginess. It all hangs together quite well with a splash of orange zest.

In the mouth: very spicy, black spices and plenty of char. A little smoke, sweetness and sourness. Mostly woody, a metallic copper aspect but devoid of those extremities we sometimes see from Glen Mhor. Some caramel, dark chocolate and robust coffee beans.

On the nose, this is quite an assured whisky. Very fitting with what Gordon & MacPhail were bottled in bygone decades. Just enough poise at 40% and a gentle influence. Creating a dram that is easily drinkable and yet not quite like anything today.

Still, this the release you'll see on your travels and it is now the entry point for Glen Mhor appreciation. Also, being the most affordable of releases it isn't a major jump into the unknown. A better than average 8 year old release in this range.