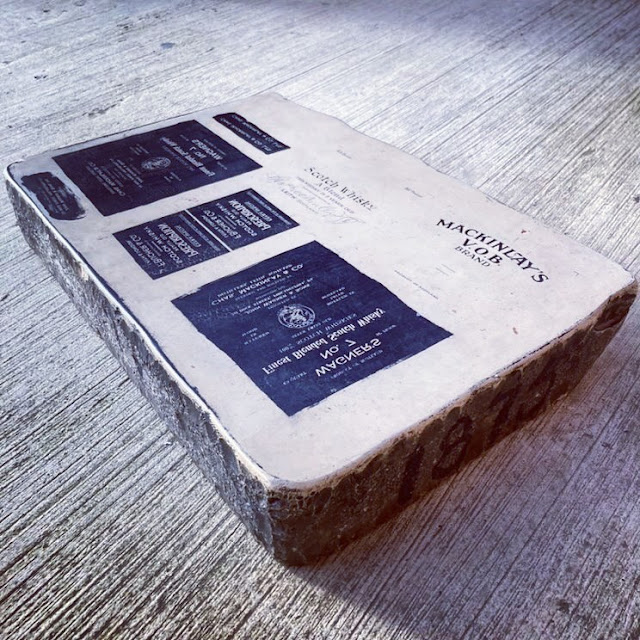 How deep can we go?

That’s the question my Glen Mhor project is starting to ask. A year on from commencing this research, there is still so much more to be considered, identified and catalogued. The simple answer must be – all the way. The rabbit hole has revealed lost information, photographs and much more besides. All of it, has increased the prominence of the distillery, with several I know, some seeking out the whiskies from Glen Mhor to engage on another level.

Late last year, I was made aware of the existence of an item with links to the Mackinlay’s and Glen Mhor. A couple of enthusiasts who appreciate the work here – including Stuart at Whisky Whims – reached out and asked if I had seen this Mackinlay’s printing stone? The immediate answer was ‘no’ but I was fascinated by the item that was now up for sale at the Fern Avenue Antiques Centre, in Jesmond, Newcastle Upon Tyne. It possibly came up via Instagram as the Fern Centre are active on the platform and they had done a post about the stone at that time. It just goes to show you the benefits of using hashtags, but also searching via them!

Hold tight, as I'll do a post about the labels on this stone at a later date. There's research to be done, but as you can appreciate, there's a story to all of this and part of the fun of the Glen Mhor project is telling (and hearing) stories. Being amazed by the item and confirming its availability, I reached out to a couple of industry friends who were similarly taken aback by the stone.

As the lot information suggests, this is likely to be around 1910-1920 with one of the labels being a prohibition era brand. I have yet to start the full research (launching a new whisky website has proven to be a modest distraction), in fact I was on the road to collect the item shortly after it went live, but we'll get to the trip shortly. I'd recommend an article I've written on researching a distillery in general, which is now online and based on my experienced doing this project. 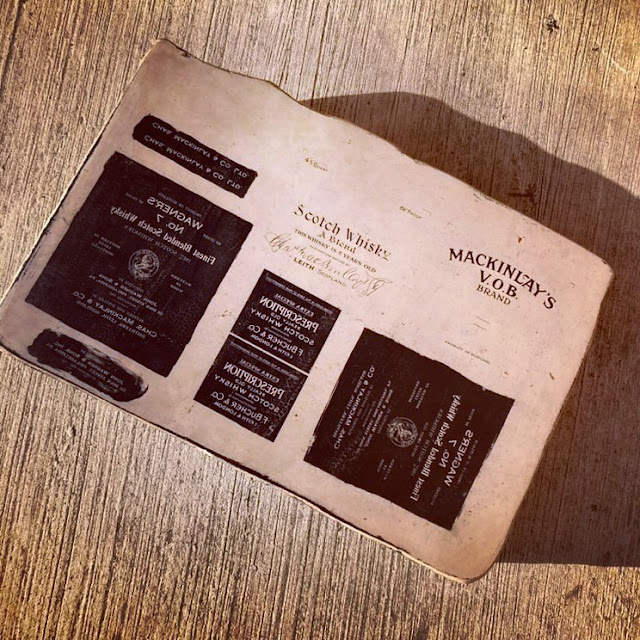 Printing stones are rarely seen artefacts and can also sometimes be double sided as well as cumbersome. This is how they used to print all the labelling for a bottling. The old fashioned way. As is the case, it was quite messy, labour intensive and the stone itself is a sheer weight. This made the stone and postage almost impossible and we wouldn't want to risk the likelihood of damaging the item, even if carriage was commercially viable.

To think that every bottle touched this stone in a roundabout way is incredible. As is the fact that it has survived. As we embrace new technologies, things of the past are cast aside and often lost and destroyed. Even our times you can drum up a list including VHS, Betamax, pagers, cassette players and so on. I've seen printing stones for American bourbons etc. but not one for Scotch. I'm sure some still survive and I'm delighted to have this item now.

Speaking with the seller, Ben, revealed his fondness for the printing stone. It is quite the centrepiece, as it is self standing and very durable. Striking a deal in late 2021 with him, Ben gladly took it home to enjoy the stone for a few more months, while we waited on better weather and that thing called COVID-19, to retreat  into the background. Eventually, a new year brought new hope and late in February, we took a family road trip to England to retrieve the stone and also enjoy our car for one last time - that's another impact of COVID-19 having to wait 9 months on a car being built and even then, things are missing...

Ben revealed that he found the stone in Berwick upon Tweed, which nestles nicely just over the border. This made sense as given the weight of it, it is very unlikely the stone would have travelled far from its original home in Leith, Edinburgh, where the Mackinlay's warehousing, blending and bottling operation was located. These small steps over the decades would be oddly retraced, as we drove past Edinburgh and Berwick, on our way to Jesmond.

I'm very familiar with this area of England, I spent much of childhood near Hebburn and South Shields, enjoying matches at St James Park and visits to the beach with my nanna and grandad. It was an overdue return, one that enabled me to take my own son on the South Shields miniature railway, which is a generational experience for those that have paid the £1.50 fee. Fish and chips was on the agenda as was stottie cake - good memories after picking up the printing stone, but I digress... 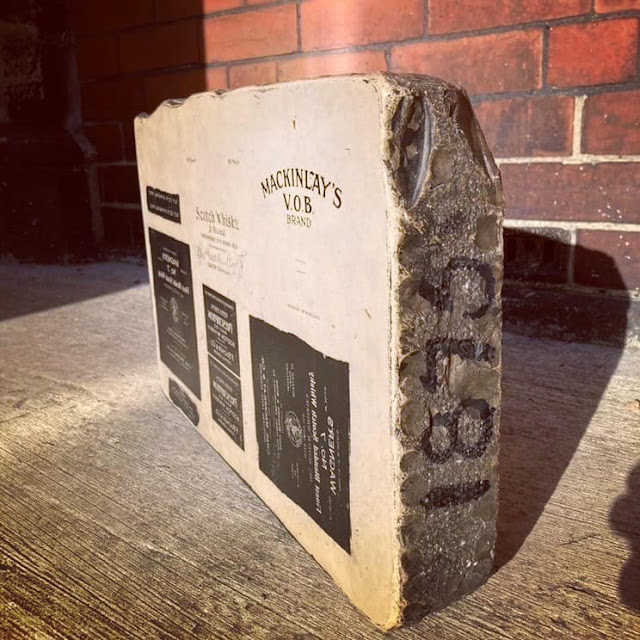 Letterpress printing was invented in the late 1400s, lithography became the norm in 1796, with the option of colour printing becoming established in 1826. Printing would have been very intensive and cumbersome but essential for companies to establish their brand and communicate their message. This is particularly true of blenders, who were exceptional sellers and larger-than-life characters; their brands were a reflection of their own personalities and culture. The Mackinlay's were no exception and placed great emphasis on their generational family business and the prominence of being distillers.

Printed and self adhesive labels didn't come into use until the 1930s, after being invented by Stanton Avery, in America. Spelling the end for printing stones as the technology became more widely utilised. Stones such as the Mackinlay stone would have been put aside, perhaps broken up and forgotten about. The fact that it has endured is remarkable as is its return to Scotland. I would have expected blenders - after all blends like today sold in vast quantities compare to single malts - to embrace the new concept of self adhesive labels. The blending houses were always looking for new ways to improve efficiencies and new technology - simple things that you take for granted such as screw tops and thinner glass.

We pulled up at Fern Avenue a little earlier than expected. A walk around the traditionally red bricked area helped shrug off the effects of the drive. Followed by a rummage in the Antique Centre itself, which prompted some childhood memories and also whisky and alcohol related memorabilia. It was the sort of place you could find all sorts of treasures and I'll return when we're next in the area, which won't be too long. My thanks to Ben and the team at the centre for the warm welcome.

Also, a big thank you to anyone that supported my Zoom online tastings, as your support has enabled me to purchase this item and associated costs, plus make preparations for the Glen Mhor tastings in 2023.

With the stone wrapped in a blanket and placed in the boot, it was time to enjoy the coast before returning home to Scotland and more research.