May 1917 The Highland Company Railway 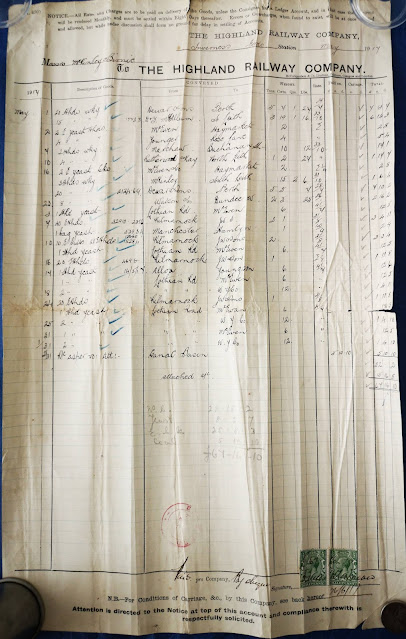 We've reached the last Highland Company Railway invoice kindly provided by Distillery View to help our ongoing research. You can see the other invoices for 1917 here.

This invoice which gives us the month's shipments to and from Glen Mhor is surprisingly dominated by yeast. There are in total 11 separate entries for yeast shipments, for all the major brewers that we've highlighted in previous articles on this topic. Confirming that Glen Mhor used a variety of yeasts at this time to meet its requirements. These 11 shipments totalled 21 bags or hogsheads or yeast, which is a considerable amount.

The firm was looking ahead perhaps? The summer would mean the harvest and with it, the seasonal pressure to distil. So, it was just simply preparing resources for the incoming onslaught of harvested grain. That seems likely, then there is the added pressure of the US Navy, about to occupy both Glen Albyn and Glen Mhor. Distilling would have to come to an end on both sites - as much as the sailors would like otherwise. This may have sparked one last push from Mackinlay & Birnie to fill their warehouses as much as possible, or fulfil the filling orders of the blenders.

In reality, it's probably a combination of both. Sensing the arrival of the US Navy and what would suddenly be planned on site, it is likely that the team made one last push to distill as much as they could to lay down, during their enforced World War One closure.

For the blenders, there are 11 entries relating to the shipment of casks from Inverness as they fill their boots before the closure. As we've seen across 1917, the Walkers of Kilmarnock were huge supporters of Glen Mhor and shipped 100 hogsheads and 10 butts during this month - that's massive. Dewar's in comparison, managed 40 hogsheads for their blending operation. The remainder of the orders were more small scale, heading to regular destinations that we've seen already in Dundee, Glasgow and Leith.

Looking back across what we know of 1917, the Walkers received:

In total, 388 hogsheads and 110 butts for their blending operation, across 5 months. Hopefully, we can correlate this with other years before and after the war. Certainly, it underlines the quality of whisky being produced at Glen Mhor in the Highland style that was greatly in demand by blenders.