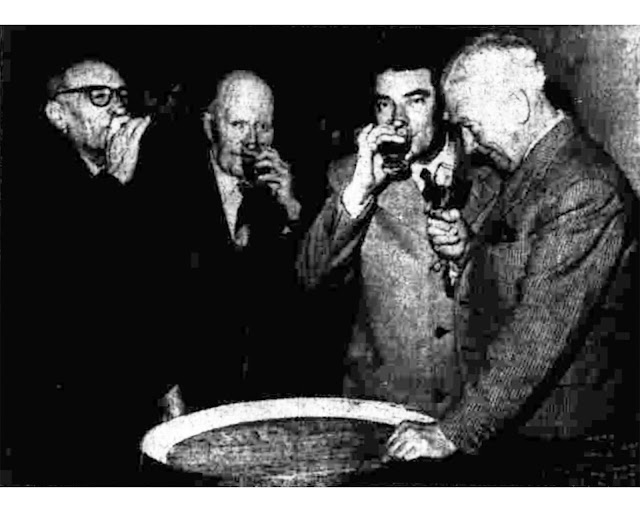 This is an extremely interesting newspaper article from the Aberdeen Press and Journal and published on Wednesday 27 January 1971, appearing on the front page.

This was during the final full year of independent ownership of the distillery, which might have been an unknown to those present. The photograph includes Willie (William) Birnie and Mr A.K. Watson and the future must have weighed heavily on their minds at the time.

William had already highlighted the issue of overproduction in Scotch whisky, going so far as in 1970 to state that the industry wasn't paying attention to the problem. We also know that much of Glen Mhor's business was filling orders for casks and this was proving to be increasingly competitive. Having spent his whole life in and around the distillery, this would come to an end soon and he passed away in May 1973. It is great to see him, still at the distillery despite being in his early 80s.

Regulars will know, I spoke with Neil, a reporter at a Highland News Media last year with a view to highlighting this project and asking the public for information. During our conversation, he recalled as a young reporter, being sent to a distillery as a bus load of Italian tourists had turned up to do a story. Going on to describe the distillery, I knew it was Glen Mhor. After all, it was popular in Italy as a single malt, and now we have here what I believe is the article itself.

One of the advantages of Glen Mhor which endures, is its availability. Assisted by its popularity in Italy, which this article underlines. The full text of the article reads as:

'Whisky from Scotland is really going down well in Italy. And to help in the sales drive more than 100 Italian whisky salesmen were shown round Mackinlay and Birnie's Glenmhor Distillery, Inverness, yesterday.

Mackinlay's gave Italian whisky importer Signore Luigi Moccia three years to sell a quote of their whisky - and in eight months he was asking for more.

Signor Moccia thought it would help sales even more if his salesmen went to Scotland to see for themselves the elaborate processes in making whisky. And instead of holding their annual sales conference in one of Italy's big cities, they held it at Aviemore, yesterday.

They were shown round the distillery by directors Mr W. Birnie and Mr Val Ritchie.

'Italy is now the fourth largest importer of Scotch' said Mr Bruce, who comes from Angus.

Mr Donald Mackinlay of the original Mackinlay family, went north from Leith to greet the salesmen and attend the conference.

The party fly back to Rome from Edinburgh when their conference and tour end tomorrow.'

It must have been a merry trip to Scotland with 100+ Italians all eager to explore whisky. 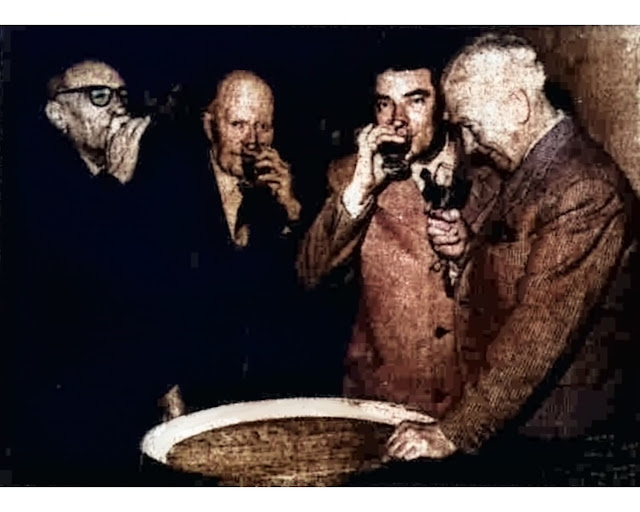 The two individuals in the photograph (Luigi Moccia, Mauro Moccia) don't ring any immediate bells with me, but I reached out via Dornoch Distillery, who are thoroughly geeky and passionate about all things distilled in their vicinity. They approached Enrico, who I've met before and enjoyed a tasting of his at the Whiskybase Gathering, which underlined his passion and knowledge for Italian whisky and its history. Who else could they suggest other than Max Righi, who is the owner and president of Whisky Antique and also the Silver Seal bottling label.

My thanks to both for adding more detail to the company on the trip, starting with Enrico:

'Moccia were importer of Glen Mhor, Mackinlay's and Jura from 60's through 90's', so there's link that continued with the Mackinlay brand after the distilleries and company were sold on,

Max, offered additional insight into the company itself:

'The history of the company began in 1946 when Mauro Moccia, a young trader from Ferrara, decided to found the Distillerie A.R.P.A. of Mauro Moccia Sas which, two years later, will become Distillerie Moccia S.r.l. under the guidance of his son Luigi and his brother-in-law Franco Simoni. It will be Luigi himself who will develop the recipe for a new egg liqueur: although an egg and zabajone-based liqueur known as Vov already existed, Luigi's intention was to differentiate himself by accentuating the sweet flavor given by the zabajone and the replacement of marsala with brandy, in order to bring the alcohol content to 15 °. The new liqueur was then registered with the brand ZABOV Cognac all'ovo; the name derives from the union of the first letters of the words ZABaglione and OVo. Along with the name, the bottle is also protected by an international patent.

Although the production of the early years was of an artisanal type, the company managed to grow rather quickly until, in 1956, the production level passed from artisanal to industrial. Towards the end of the 60s Distillerie Moccia, in addition to Zabov, offers about 70 different liqueurs including sambuca, punch, brandy and bitter, managing to export abroad as well. In recent years, the company's popularity also allows it to become testimonial of events such as the Giro d'Italia and the Festivalbar.

However, the high production rates forced the company to move to a larger plant but the economic repercussions due to the change of location and wrong investments forced Luigi Moccia and Franco Simoni to sell the company in 1974. Two years later, in 1976 , the Ori family buys the company and becomes its new owner, a role it still holds today. The change at the top has led to a decrease in the production of some liqueur lines to focus more on Zabov; at the same time, substantial investments were made in 1986 which made it possible to switch to fully mechanized production. This new production rate allows about 30,000 bottles to be bottled per day, which corresponds to about 400,000 liters per year. According to company data from 2012, 85% of sales fall on the Italian market, while 15% comes from the foreign market. The main export countries are the United States of America, Canada, Germany, the Netherlands, Austria, Switzerland and Lithuania.

In 2013 Distillerie Moccia acquired the Punch Barbieri brand from the Campari Group following its sale by the Milanese company.'

My thanks to all involved for highlighting the role of Moccia and it seems a logical move for Mackinlay & Birnie to tap into their extensive distribution network and positioning within the Italian market. Giving them instant access and a new source of income. Sadly, it was not to be a long term outlet for the Glen Mhor single malt, as when D.C.L. purchased the company in 1972, one of their first actions was to stop the bottling of the official range - instead using stock for their own Highland malt blending needs. An unfortunate and abrupt end to what might have been a very prosperous presence in Italy.

However, thanks to the efforts of these Italian salesmen, the country remains a regular source of Glen Mhor bottles and thankfully so, as its domestic popularity was limited to the belt of Inverness and Aberdeen.

And there is the prospect of unseen photographs. After all, a busload of Italians on holiday, it's fair to speculate that a few images would have been taken and these may have included Glen Mhor. I wouldn't be surprised if some images were found at a later date, stranger things have happened with this research project.

My thanks to Rose for restoring the original image and adding a splash of colour.