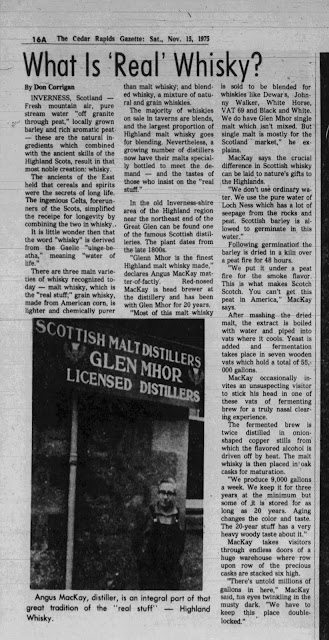 This repackaged article, picked up by the Gazette for Cedar Rapids, Iowa, is one that we've seen previously with Angus Mackay featured. Coming from the same writer, the original article appeared 2 weeks prior in the Pantagraph and can be seen in our Newspaper Section.

Nothing much more to be added, as the photograph is exactly the same as well (unfortunately), but Angus does deliver some memorable quotes that we've put into our Quote Section. What regional readers thought of the article, Glen Mhor and Angus, is open to debate. It seems odd that D.C.L. would have allowed such a piece for a single malt that was a component of its Highland blending operations and only supported by Gordon MacPhail to a greater extent as a single malt. Neither option would have been readily available to readers in Cedar Rapids and the 'real stuff' would have likely been whiskey.

As for the provocative question in the headline, the answer from Angus is clear and that's the water source and use of peat. Although today we know whisky (or whiskey for that matter) is exactly what you make of it.