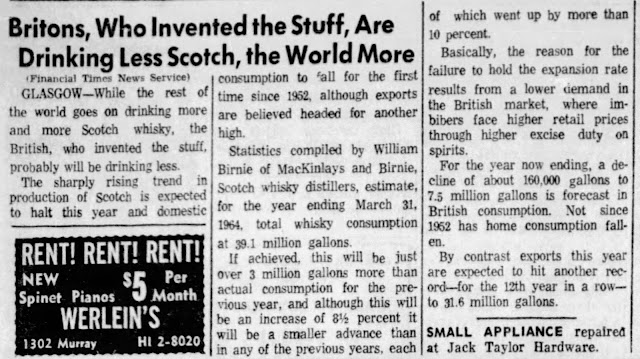 Here's an interesting article that was picked up by the regional press in January 1963, by The Town Talk (Alexandria, Louisana), which stemmed from a Financial Times report.

William Birnie trained as an accountant before returning to the fold at Glen Mhor. We've shown other articles that he was not afraid to highlight the dangers of overproduction, which the Scotch industry was oblivious to, as it propelled towards the whisky loch of the late 1970s - a fate that would befall Glen Mhor and Glen Albyn under new ownership.

Long before any Whisky Bible, William was producing annual statistics on the Scotch whisky industry and drawing his own (reasonable) conclusions. These appeared in a series of annual statistics, some of which are contained within our Document section.

The series was long running, and continued the thorough book keeping at Glen Mhor, which you'll see from the above link was very much the way of things - allowing us to see all sorts of information, including Scottish versus International barley.