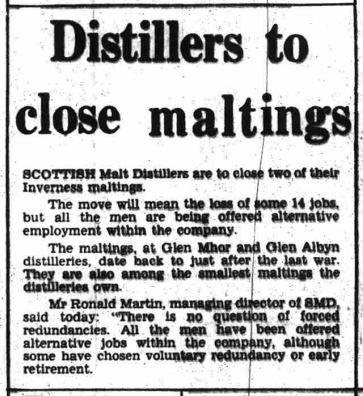 News that the maltings at both Glen Mhor and Glen Albyn were to close as published in the Aberdeen Evening Express on 19th September 1980. We know from existing research, that the last 3 years for both distilleries, both relied on malt delivered by lorry from a more central maltings in the S.M.D. arsenal.

This was a common move across the industry and one that remains in place today, although interestingly, some distilleries are making moves now to reassess the character of having their own maltings on site.

We know from an unpublished William Birnie interview in 1953, that in total, both distilleries employed 26 men. The large proportion of these would have been engaged with operating the maltings which was the most labour-intensive aspect of production. Effectively, removing just over 50% of the workforce from Glen Mhor and Glen Albyn.

Our Saladin Box research in 1949 highlighted the labour aspect and potential costs of building a new malting floor, which would have entailed hiring a completely new team at Glen Mhor, comprising of 9 men including night shifts. So, the existing malt team at Glen Mhor would have been around 9 in total, and with the introduction of the Saladin Boxes, this was believed to have been reduced to 3 men to operate the machinery. At Glen Albyn, the numbers would have been larger because the maltings were of a bigger scale. Glen Mhor always had an issue that it could not produce enough malt to meet its production demands and Glen Albyn effectively filled in those gaps as and when.

While the men were offered roles elsewhere, these may have been short-lived with the forthcoming closures across the industry in 1983. As noted, several decided to retire, and this may explain another news article from 5th November 1980 which underlines a trio retiring... 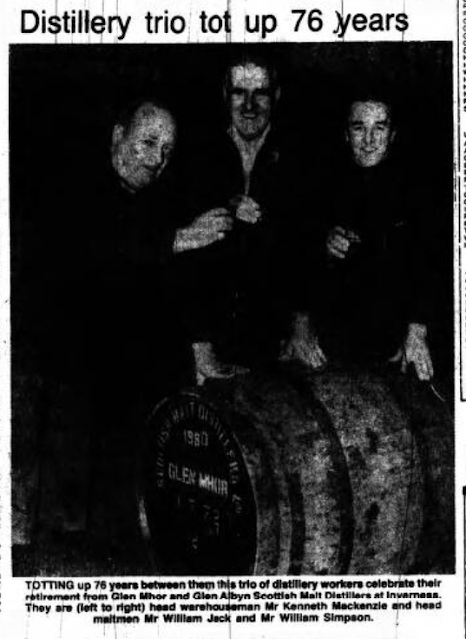 Featuring two maltmen, there is a talent drain evident at both distilleries which would have been previously seen as a longstanding career. Hopefully, Kenneth and both Williams enjoyed their retirement and if there are any family relatives, please get in touch.

As for the maltings, these buildings would fall idle once and for all, before being demolished later in 1986.