Smark's Drinks The Perfect Malt: All This And Culloden Too - The Canberra Times Sunday 1st December 1985 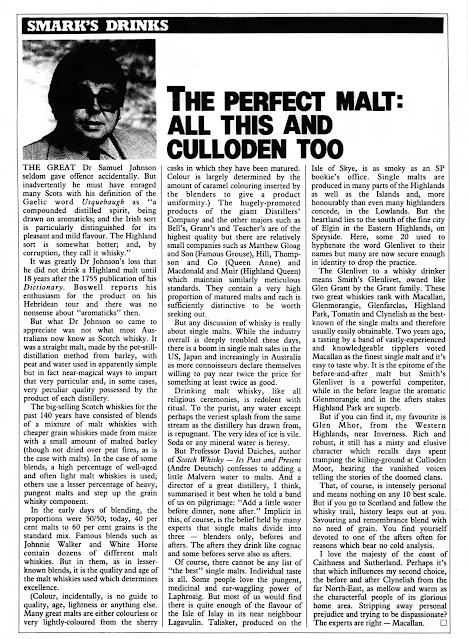 Despite being closed for over 2 years and subsequently dismantled, Glen Mhor continued to receive international recognition with the bulldozers set to move in the following year.
This particular article seems to be a regular alcohol column by Australian drinks writer (Tony) Smark, who covered a variety of spirits, beers and wine. In this column, he takes on the legacy of Scotch and selects the one that he prefers:
'But if you can find it, my favourite is Glen Mhor, from the Western Highlands, near Inverness. Rich and robust, it still has a misty and elusive character which recalls days spent tramping the killing-ground at Culloden Moor, hearing the vanished voices telling the stories of the doomed clans.'
Before selecting Clynelish as his runner-up, and if all personal prejudice and dispassion was removed? The Macallan. Shame, he was on a run of form until that.
Joking aside, it shows the stylish charms of Glen Mhor and its impact on those who were able to experience it. Perfect? Well, nothing is that good despite the publicity, but the whisky from Inverness has character and even today, it shines through.
Labels: 1985 Glen Mhor newspapers