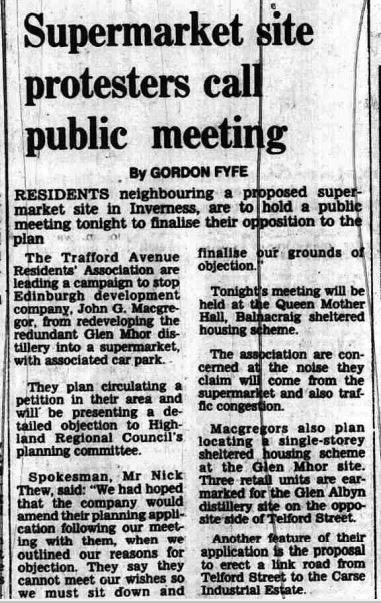 When it comes to the fate of Glen Mhor, most publications only go so far as to state it was demolished for a supermarket and associated car park. Nothing more, nothing less.

The reality is somewhat very different, although that was the final outcome. In fact, there was a great deal of debate about what to do with the redundant site and challenges to the supermarket plans. As shown in this Aberdeen Press & Journal article from 6th August 1985. We'll be discussing these stages in subsequent newspaper articles and trying to shed some light on other suggestions for the distillery - I've been told it was mooted to have the area as a historical tourist site, which sadly never came to fruition.

In 1985, the debate ramps up a notch as if demolished, this really opens up the avenues for developers and what they can look to achieve. The Trafford Avenue Residents' Association are quoted in this update:

'We had hoped that the company (the developers) would amend their planning application following meeting with them, when we outlined our reasons for objection. They say they cannot meet our wishes so we must sit down and finalise our grounds of objection.'

The principal objections listed are increased traffic and noise levels. A visit to the area today will confirm just how busy this section of the city is, the noise because of it and that the infrastructure just isn't there to cope with the volume as laid down following the development of the area in the 1980s.