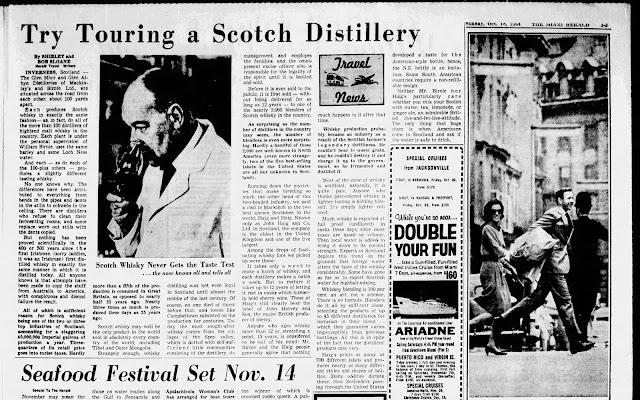 Here's an interesting find from 1964, which underlines Scotland as a destination and the growing interest around Scotch. Pitched as travel news, it highlights Glen Mhor and Glen Albyn, as well as the general history of scotch and blended whisky.

The opening pitch is interesting, but entirely true. Two distilleries so close to one another, with similar inputs, can have different styles of whisky. There is a technical answer of course, but this approach underlies to the casual reader that all whiskies are indeed not the same. Imagine if they were!

We're seeing several similar themed articles appearing in our Newspaper section that promote Glen Mhor as well as William Birnie. While he is named in this article a couple of times, there are no direct quotes for once, but the theme of Glen Mhor being visible across the world continues to build.

We do know that Glen Mhor was available for tours, which went against much of the Scotch whisky industry at the time. Few were open or accommodating such requests. Set times were on offer in 1971 and prior to this it seems to have been by arrangement, but not immediately dismissed like some producers.