Appearing in the Aberdeen Press & Journal on 23rd January 1968, we have another of these articles based around William Birnie's statistics and the boom in Scotch.

We know that William was trained as an accountant before taking his role up in the family business of distilling. On average, he spent around 4 months of the year trying to compile these statistics, which seems a thankless task from the reflective comments he made about their creation. Information was not easily shared or recorded it seems and some effort was required to pull everything together.

His dedication to producing these annually is admirable, as is providing commentary. As far as we know the publication was made readily available to wannabe readers at no extra charge. You can see some of the issues in our Documents section and these ran from the late 1930s until the early 1970s. We have plenty of gaps, so if you should come across any of these leaflets, please let us know. 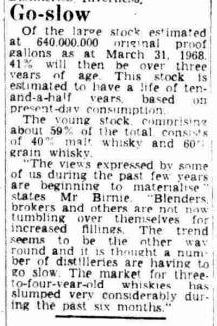 'The views expressed by some of us during the past few years are beginning to materialise. Blenders, brokers and others are not now tumbling over themselves for increased fillings. The trend seems to be the other way around and it is thought a number of distilleries are having to go slow. The market for three-to-four-year-old whiskies has slumped considerably during the past six months.'

This certainly is something that William had been warning against during the 1960s and despite this quote, he does seem to have been a solitary voice in this belief. And it echoes the fate of Glen Mhor and Glen Albyn, why potentially, just a few years that Mackinlay & Birnie decided to step away from the business of distilling. D.C.L. needed Highland malt for their blends and probably weren't as forthcoming with orders and instead came up with a deal too good to refuse for both distilleries. And the rest is history...

It also highlights the position of William in the industry and the lack of mature stocks across Scottish inventories. The latter would dramatically change just a decade later with overproduction taking root.