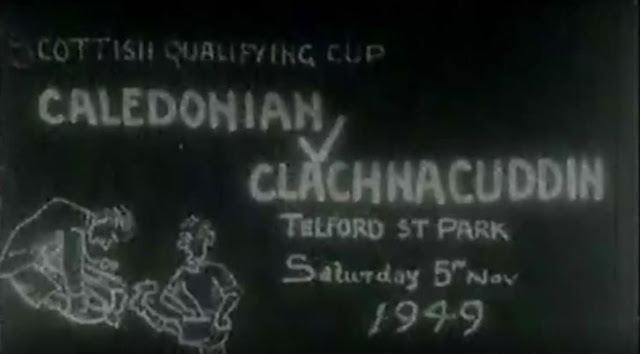 Any video footage of Glen Mhor is exceptionally rare, meaning our video section is the most sparsely populated section of the website. Fortunately, discoveries are being made and this match report of a 1949 Qualifying Cup (North) Final, between Caledonian and Clachnacuddin is one such find.

The distillery warehouses formed a border with the Caledonia football ground to the east of the site. The end of the ground was fondly called 'the distillery end' and the team formed part of the vibrant Muirtown community. Telford Street Park was demolished in 1996, leading to the creation of Inverness Caley Thistle FC on the other side of the city; a venture that still has its critics to this day.

Thanks to Am Baile who host the full-length video of this cup encounter, with the footage coming from the Archives of Inverness Caledonian Thistle FC. Hopefully, there are more such-like discoveries to be made, with the description of this film being:

Footage from the final of the 1949 Qualifying Cup (North) Final between Caledonian and Calchnacuddin at Telford Street, Inverness.

Caley won the match 3-0 with goals from Gillies, Mackenzie and Mitchell.

Thankfully the cameraman did more than just take footage of the match. He also caught the scenes around the ground prior to kick off and it gives us a sense of the Telford Street, the hustle and bustle of the local community that is fondly remembered in conversations I've had with locals. This is the community vibe that was lost as the distilleries of Glen Albyn and Glen Mhor were closed, the surrounding businesses demolished, and the football ground levelled. Muirtown changed forever and today's incarnation is a hollow imagining of the past. This is our first sighting of the distillery end, just prior to kick off and some of the production buildings to the right and trees behind would have been on the other side of canal: 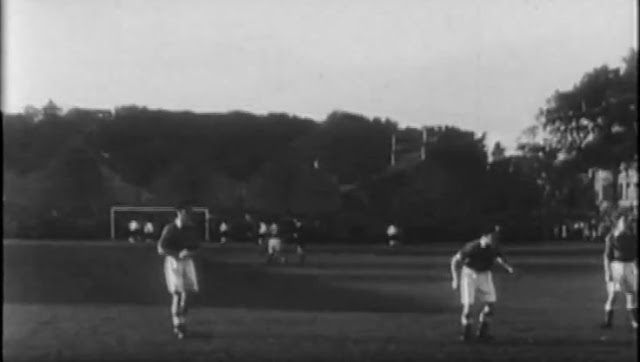 Fortunately, the cameraman sees the value in moving around the perimeter of the pitch during the game itself. Granting us a sense of the excitement, packed stands and different views. This includes several sightings of the Glen Mhor warehouses, which I've also captured as images for this article.

This following image is a close-up prior to the big kick off and gives us the last warehouse to be built (on the right) and looking out to the other side of Telford Street. Yes, I believe that's the chimney stack of Glen Albyn in the background and the white building I can only presume is Muirtown Inn that was built by the former owner of Glen Albyn in the 1800s. The same inn that had a very infamous pipe running between it and Glen Albyn distillery, as investigated in this article, on our sister Glen Albyn site. 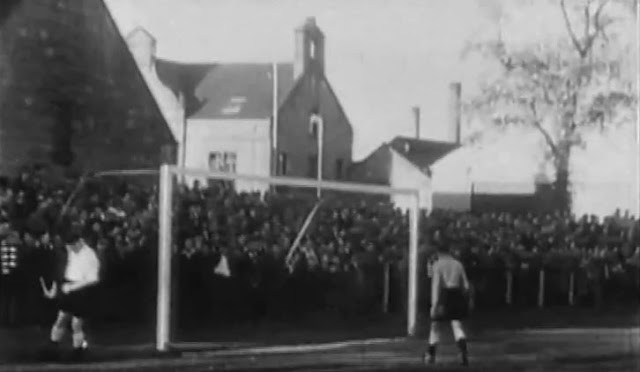 The next image gives us more of the warehousing, underling how imposing they were but also one of the distillery buildings that were added after the original build in the early 1890s. In fact, I'd go so far as to suggest it is the workmen's houses that occupied this corner of the site, and you can see in these 1904 alterations that we've previously discussed. 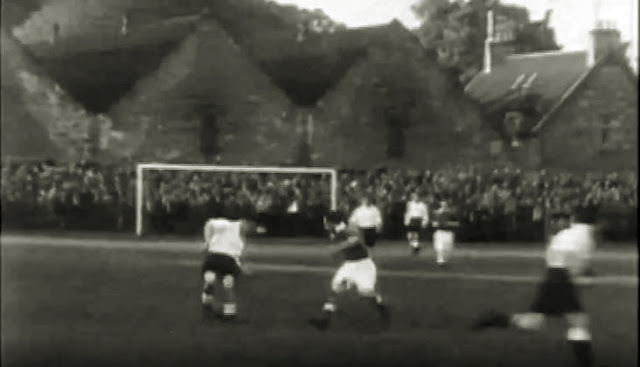 In the next image, it is easy to see why the distillery end was so called. You can see on the left a pole from the actual goals and then squashed up against the warehousing, a bustling crowd of onlookers. No wonder we have reports of some climbing the warehouses to get a better view!

The Telford stadium has character and that's something I recognise from my own youthful days, venturing across Scotland following the Raith. Many of these grounds - like Telford - have been lost to developments or modernised to the point where any character has been lost to time. I always find this sad, despite the mooted progress etc. Grounds have character and you can still sense it in some of the lower league grounds such as Cowdenbeath, or even Raith, who despite sizeable investment, have retained their unique L-shaped stand.

I'm sure many fellow football fans will know the routine of visiting a ground, particular at home, where you'd stand in a similar spot and be surrounded by individuals you wouldn't see until the next match. A sense of comradery united everyone and when visiting opposition grounds, top of the essentials were the location of the nearest pub, the food stall location and who had a copy of the match day programme. 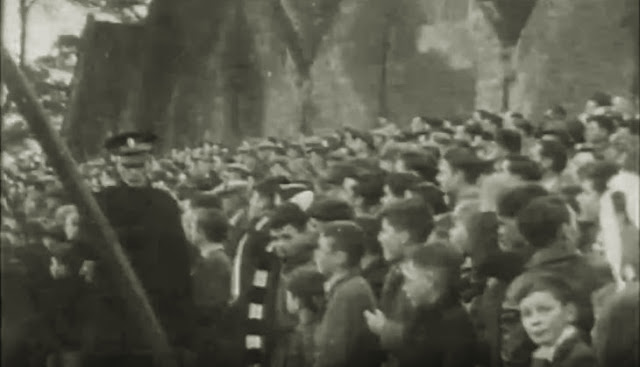 At least at the distillery end, you wouldn't need ball boys, as the ball would kindly bounce back, or for more wayward efforts, fall into the possession of the distillery staff. What isn't known is if someone was dispatched to recover the lost balls within the grounds of Glen Mhor. 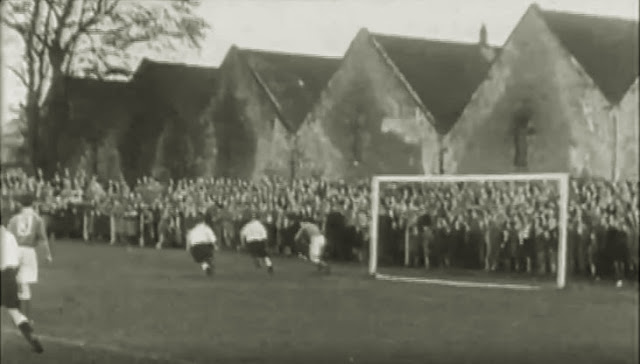 From my time at Raith, it was a constant source of amusement if a player managed to boot the ball out of the stadium, towards the town and down the hilly road - someone was often sent scampering to retrieve the ball. Better still, those efforts that threatened onlooking houses with their pristine windows. Such idiosyncrasies, whilst inherently related to Scottish football, will be repeated worldwide.

Still, I've yet to see a more whisky themed and essential backdrop as the one at Telford Street Park. Glen Mhor is a sad loss to whisky, but it must be said, also to football. While Bovril might have been the choice or drink to keep warm on a November's day in Inverness, chances are a few wee nips of Glen Mhor must have been enjoyed amongst the crowd. 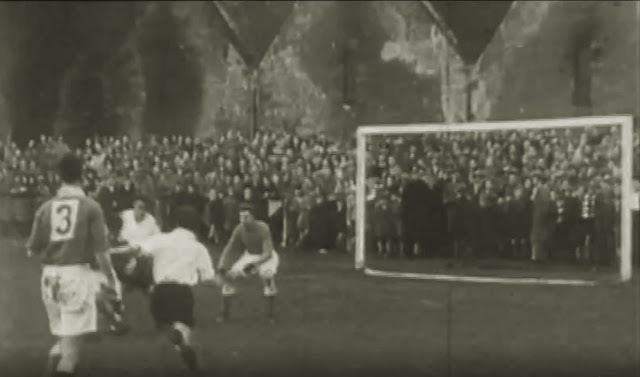 November 1949 was a hugely symbolic period for Glen Mhor, as it had become the first malt distillery to implement Saladin Boxes, just a couple of weeks prior to this match. The official opening of the Boxes would take place on 18th November, featuring an array of guests, including company directors, the Provost of Inverness and the local Member of Parliament to celebrate this achievement.
Not to exclude their valued workforce, the distillery owners also arranged for a staff party on 19th November at Cumming's Hotel, where friends of staff could also attend. This function served a dual purpose of bringing the workforce of Glen Albyn and Glen Mhor together; to celebrate the Saladin Boxes, but also the centenary of Glen Albyn. No doubt, a few whiskies would have liberated from the warehouses for an evening to remember.
And a final note would be that the warehousing in 1949 had no writing on it, which we know existed in later years and possible earlier.
Labels: 1949 Caledonian FC video