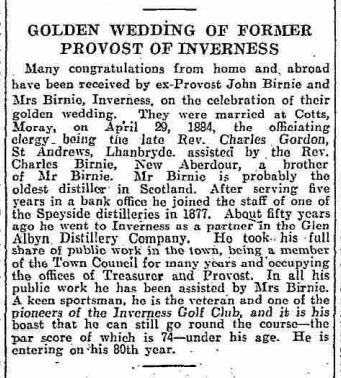 One of the aspects of the Glen Mhor research has been the personal aspect, as we discover more about the major players in the distillery and see their lifespan in print. John, was quite a remarkable man, beginning in banking before deviating into the career of a distillery - an option that many of his family took on Speyside.

He worked at Benrinnes learning his craft, before joining Glen Albyn as distillery and not a partner as the above article suggests. It was this failure to secure a slice of Glen Albyn, that prompted him to look elsewhere and lead to a partnership with the Mackinlay's of Leith, which gave birth to Glen Mhor.

The tagline of the Oldest Disitller in Scotland is one we've seen in several of the articles that we've catalogued about John; a remarkable man who is deserving of more appreciation today. As you will discover from the prior link, his work extended outside of distilling and into the community. Something that is fondly remembered today, and his portrait still hangs in the Inverness Town House to this very day.

Hopefully, we can uncover more of John's achievements through our ongoing research.